Remember the Heroes of Flight 93 on Memorial Day 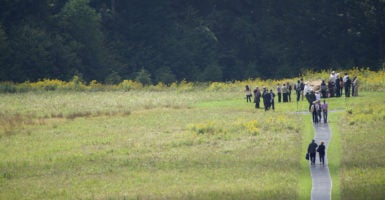 Shanksville, Pennsylvania, is far removed from the busy bustle of Wall Street in New York City and the secure grounds of the Pentagon in Washington, D.C. Here, in the tranquil farming fields of southwestern Pennsylvania, ordinary Americans gave their lives exhibiting a bravery equal to that of any Navy SEAL team.

It was here on the morning of Sept. 11, 2001, that Todd Beamer and a handful of other passengers stormed the cockpit of United Flight 93 and prevented Islamic terrorists from achieving their likely goal—smashing the Boeing 757 jetliner into the gleaming dome of the U.S. Capitol.

Already on that tragic morning, hijacked planes had crashed into the North and South Towers of the World Trade Center in New York—symbols of America’s capitalist wealth—killing everyone in both planes and many hundreds more in the towers. A third plane piloted by terrorists had hit the Pentagon, a symbol of America’s military might, killing several hundred civilians and military personnel.

The plans of Al-Qaeda leader Osama bin Laden seemed to be perfectly under way, but he failed to reckon with the courage of everyday Americans who would step up to challenge him.

Americans like CeeCee Lyles, a 33-year-old flight attendant. Lyles had just embarked on a new career after working as a police officer in her hometown of Fort Pierce, Florida. Five minutes before the plane crashed, she reached her husband by phone, and they were able to pray together before she said to him, “Tell the boys I love them. We’re getting ready to do it now. It’s happening!”

Passenger Thomas Burnett, 38, CEO of a medical supply company, made phone calls to his wife and revealed key details about the hijacking and the passengers’ plans to take back the plane. He said, “We have to do something. We can’t wait for the authorities. … It’s up to us. I think we can do it.”

Passenger Honor Wainio, 27, a district manager for the Discovery Channel, phoned her stepmother who recalls Wainio saying, “They’re getting ready to break into the cockpit. I have to go. I love you. Goodbye.”

Passenger Todd Beamer, 32, an account manager for a software company, called an Airfone representative to relay messages to his pregnant wife and their two children. At his request, she joined him in the Lord’s Prayer and a reciting of Psalm 23. At the end of the prayer, she heard him say to the other passengers, “Are you ready? OK. Let’s roll.”

What we know about the half-hour between the plane’s initial hijacking and when it crashed into the Pennsylvania countryside comes mainly from the phone calls made by crew members and passengers to their families and friends. They learned that hijacked planes had plunged into both the World Trade Center and the Pentagon. It was clear that the terrorists in control of their plane were intent on hitting a similar target in Washington, either the White House or the Capitol.

Discussion among the passengers was brief and to the point—something had to be done to stop the terrorists, and only they could do it. The flight data recorder shows that the terrorist pilot began rolling the plane from side to side and pitching it up and down to keep the passengers and crew off balance. The cockpit recorder indicates a violent struggle took place, with sounds of raised voices and breaking glass—but the passengers would not be deterred.

The passengers went down with their plane at 10:03 a.m., just 18 minutes’ flying time from the Capitol. All 33 passengers, seven crew members, and four terrorist hijackers were killed.

This September will mark the 17th anniversary of the terrorist attacks of 9/11 that took the lives of some 3,000 innocent people—corporate executives and secretaries, servicemen and civilians, police and fire fighters, Christians, Jews, and Muslims. There will be prayers and wreaths and flags lowered to half-mast. Most of the media’s attention will focus on Ground Zero in New York City and the Pentagon in Washington, and understandably so.

But let us not forget Flight 93. Let us praise those who made the ultimate sacrifice for their fellow citizens. The memorial to Flight 93 contains a wall of names and a Memorial Plaza bearing the words, “A common field one day, a field of honor forever.” There is a visitor center with electronic displays that tell the tragic events of 9/11.

The Flight 93 memorial will have a new feature in September—a 93-foot tower with 40 aluminum wind chimes, one for each passenger and crew member. At night, the tower will be lit like a beacon.

If you are ever in southwestern Pennsylvania, perhaps on this Memorial Day, traveling to or from Pittsburgh, take a short detour on PA-30 and look for the Tower of Voices. Say a prayer for the amazing men and women whom it memorializes, and thank God that we live in America, the land of the free and the home of the brave.