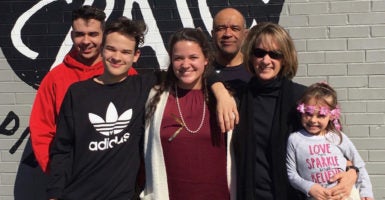 Adopting a daughter has changed her life and opened her eyes to the beauty of adoption, one mother says.

Finding out that the baby was addicted to an opioid couldn’t dim that beauty, she recalls in an interview with The Daily Signal.

“I can’t even tell you or measure the amount of joy that she has brought to us,” Lisa Alexander, who adopted 4-year-old Katharine with her husband Bruce, said in the phone interview Monday.

“When I first saw Katharine, it was very, very similar to having a birth child, like your own child,” Alexander said. “I think [that’s] what opened my eyes, and my heart, to understanding adoption.”

“Katharine’s 4 years old and she is full of incredible energy, spirit, and talent,” Trump told attendees at a gala hosted by the pro-life organization Susan B. Anthony List. “At the age of 2, she memorized ‘America the Beautiful.’ She recites poetry, and recently she announced to her dad that when she grows up she wants to be a famous police officer. And then when she gets tired of that, she wants to become president.”

After inviting Katharine and her parents up on the stage at the National Building Museum and greeting them, Trump added: “She’ll be president someday.”

Katharine, a beautiful, healthy 4-year-old, was born with an opioid dependency & adopted by a loving loving family and honored tonight by @POTUS at the 2018 #sbagala pic.twitter.com/dtonAFAZNJ

“Katharine reminds us that every life is sacred, and that every child is a precious gift from God, so true. As the Lord says in Jeremiah, ‘Before I formed you in the womb, I knew you. Before you were born, I set you apart.’”

Alexander, 53, and her husband, Bruce, 60, had always wanted to adopt. But they had four children of their own and knew their ages could work as a factor against them.

In 2012, she attended a pro-life Mass at St. Matthew’s Cathedral in Washington, D.C., where she heard a guest speaker who had adopted six children, Lisa Alexander recalled.

“And the youngest child she said was about 8 months old. But more importantly, this woman looked to be my age, and at that time I was 47 turning 48 that year. And from that point on I just felt like the Spirit calling me, and I thought, ‘Well, this is kind of unusual at this late stage.’”

The Alexanders, who reside in Gaithersburg, Maryland, began the adoption process.

“Doors just kept on opening,” she said, and the couple began going to classes with Bethany Christian Services in Crofton, Maryland.

“My husband was able to get off work … at  3 or 4 p.m. to make it … for the eight weeks of classes,” Lisa Alexander said. “It was just amazing in itself the path that led up to that.”

When Alexander turned 50, she recalled, the couple began to consider adopting an older child instead of a baby.

But all that changed when they received a call from their social worker.

“She told us about … Katharine, and she said that she was passed over by a couple, and that we were the next in line, and the reason being is that she had an opioid addiction,” Alexander said.

Katharine’s birth mother was addicted to OxyContin due to pain from a back injury, and as a result the baby had to be weaned from the drug.

The agency, according to its policy, gave the Alexanders 24 to 48 hours to think about their decision.

“We called them the next day, 24 hours later, to say yes,” Lisa Alexander said.

The couple brought her home Feb. 6, and the adoption was finalized the following January.

“The only thing I could attribute it to is just the Holy Spirit moved throughout this whole process. And we got to see Katharine twice … at the adoption agency, before we were able to take her home,” Alexander said. “And at that time, she was like 6 weeks old.”

The couple used the same agency,  Bethany Christian Services, that Lisa Alexander’s sandwich-board sign had invited expectant mothers to look into when she held it outside Dr. LeRoy Carhart’s abortion clinic in Germantown, Maryland.

Carhart gained notice as one of the few physicians in the nation known for performing late-term abortions. In 2017, the Germantown clinic where Carhart did abortions was closed after being sold to Maryland Coalition for Life.

The sign Alexander carried outside the clinic said she was willing to adopt and included the number for Bethany Christian Services.

Not much changed when Katharine joined the Alexander family, she said.

When Katharine got a little bit older and the weather was warm, Alexander would take the baby and promote adoption at the same abortion clinic.

The Alexanders’ oldest daughter, Codi, died in 2009. The three other children, Taylor, 22; Chase, 18; and Brandon, 15, welcomed Katharine as a sister, according to their mother.

“They don’t treat her any differently,” Alexander said. “They love her just the same as if being born into a family.”