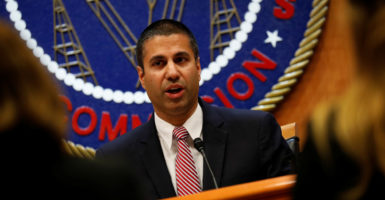 “On June 11, these unnecessary and harmful internet regulations will be repealed and the bipartisan, light-touch approach that served the online world well for nearly 20 years will be restored,” FCC Chairman Ajit Pai says. (Photo: Aaron P. Bernstein/Reuters/Newscom)

“This move by the Democrats threatens American ingenuity and the countless good-paying jobs created by internet startups,” Sen. Steve Daines, R-Mont., said in a statement provided to The Daily Signal. “Some of America’s most innovative companies have resulted from an open and free internet. That’s why I support the FCC’s actions to restore internet freedom.”

In 2015, the Obama-era FCC imposed net neutrality restrictions on broadband providers and essentially banned any unequal treatment of data being sent on the web. The rules banned blocking or slowing content which effectively prohibited discounts and premium pricing.

The rules were repealed Dec. 14. That change will go into effect June 11. Previously, all internet service providers were forced to treat all data on, and users of, the internet equally.

The ambiguity of the rules also forced providers to go to the FCC for permission each time their service changed, according to James Gattuso, a senior research fellow at The Heritage Foundation.

“Contrary to what the hysterical left-wing rhetoric would have the American people believe, repealing ‘net neutrality’ has not led to the death of the internet as we know it, nor has it led to higher prices or slower internet traffic,” Heritage Action for America, the lobbying affiliate of The Heritage Foundation, said in a statement about Democrats’ efforts to reinstitute the internet rules.

To reinstate the rules, Democrats want to use the Congressional Review Act, which allows Congress to review and rescind rules passed by federal agencies. However, in this instance, Democrats and a Republican, Rep. Susan Collins of Maine, want to use it to overturn the FCC’s repeal of the Obama-era net neutrality rules and reinstate them.

Using the Congressional Review Act to reinstate a regulation rather than repeal it is unheard of, Sen. John Thune, R-S.D., said Wednesday in comments delivered on the Senate floor.

“The [Congressional Review Act] has never been used to re-regulate,” Thune said, adding:

That is what this is doing. The FCC is unwinding the heavy-handed regulation that went into effect in 2015, and this is going to attempt now to re-regulate, not to deregulate or prevent regulations from going into effect. That has never happened before.

Do my colleagues on the other side honestly think that Republicans in the House of Representatives are going to vote for that or that President [Donald] Trump will sign it into law? No. Everybody knows better than that.

A simple majority of 51 votes is usually needed to pass the resolution disapproving of a rule under the Congressional Review Act. However, since Sen. John McCain, R-Ariz., is on leave for medical reasons, only 50 votes are needed, The Washington Post reported.

If the Senate passes the resolution, it would then go to the House and then to Trump for his signature, although it is unlikely that the president would sign the repeal of the net neutrality restrictions.

“I strongly support a free and open internet,” Federal Communications Commission Chairman Ajit Pai said in a statement provided to The Daily Signal. “And that’s exactly what we’ve had for decades, starting in the Clinton administration. The internet wasn’t broken in 2015, when the prior FCC buckled to political pressure and imposed heavy-handed Title II rules on the internet economy.”

Pai, who was appointed by Trump in 2017, said the undoing of the rules will foster greater competition on the internet.

“On June 11, these unnecessary and harmful internet regulations will be repealed and the bipartisan, light-touch approach that served the online world well for nearly 20 years will be restored,” Pai said, adding:

The Federal Trade Commission will once again be empowered to target any unfair or deceptive business practices of internet service providers and to protect [Americans’] broadband privacy.  Armed with our strengthened transparency rule, we look forward to working closely with the FTC to safeguard a free and open internet.

Roslyn Layton, a visiting scholar at the American Enterprise Institute, who focuses on evidence-based policy for information, communications, and digital technology industries, told The Daily Signal in an interview in March that Democrats’ efforts to reinstate net neutrality regulations are a fundraising scheme.

“The president has also said he would not sign it,” Layton said during a podcast for The Daily Signal. “But, for them, it is for fundraising. They can send out a message and say, ‘Help us get one more vote,’ or ‘Help us save the internet,’ people send them five dollars. So it is a great fundraiser for the Democrats. It is absolutely meaningless policy, they know that, they just do it to fundraise.”

Gattuso, Heritage’s senior research fellow who specializes in regulatory and telecommunications issues, told The Daily Signal in an email that the effort to reinstate the rules is a call for greater internet regulation.

“Once more, misguided friends of red tape are working overtime to place the internet in a straightjacket of red tape,” he said, adding:

Consumers will be the losers if network neutrality rules are once more slapped on internet service providers.

The internet is the most successful and innovative marketplace on earth. But it could be condemned to a slow death if the special interests and the anti-market ideologues succeed in taking power away from consumers and to the bureaucrats.