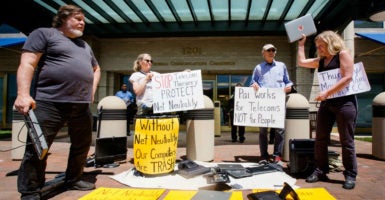 Individuals protest the initiative to undo Obama-era net neutrality rules outside of the office of the Federal Communications Commission. (Photo: Erin Schaff/UPI /Newscom).

Undoing the 2015 Open Internet Order would “encourage more investment in broadband [and] more innovation,” James Gattuso, a senior research fellow at The Heritage Foundation, told The Daily Signal in an interview.

The order did two things. First, Gattuso said, it “declared all providers of broadband service to be common carriers under Title II of the Communications Act of 1934, which allows extensive regulation of “telecommunications services.”

This means that “the FCC got virtually unlimited authority to regulate [internet providers],” Gattuso said. Using this self-created authority, the FCC then imposed net neutrality restrictions on broadband providers. These rules essentially ban any unequal treatment of data being sent on the web. Thus, blocking or slowing content is banned, as is “paid prioritization,” effectively prohibiting discounts and premium pricing.

Making it worse, the ambiguity of the rules mean that providers end up going to the FCC for permission each time their service changes. “Every time [broadband service providers] do something, they have to go to the FCC and ask, ‘Does this violate any of the rules?’” Gattuso said.

The 2015 rule, Gattuso said, also banned practices that “unreasonably” limit consumer choice, or the ability of content providers such as Google or Netflix to make their offerings available to consumers.

The vote Thursday will commence a public comment period, which will allow Americans to weigh in on the decision to undo the 2015 Open Internet Order rules.

Ajit Pai, the FCC’s chairman who President Donald Trump appointed in January, said he believes in the free market rather than government control of the internet. Pai also said he wants the FCC to have more of a “light touch” in regard to regulations.

Mike Needham, chief executive officer of Heritage Action for America, the lobbying affiliate of The Heritage Foundation, said in a statement that this deregulation move is welcome.

“Chairman Pai and his colleagues at the FCC have demonstrated leadership by jump-starting the process of rolling back these so-called net neutrality rules,” Needham said. “The political left’s desire to treat internet service providers as publicly regulated utilities will erode choice and competition in the marketplace.”

I support the work being done by @AjitPaiFCC & the @FCC to restore the #OpenInternet. https://t.co/uAsKzWZgWU

Sen. Mike Lee, R-Utah, approved of the move by the FCC.

“I commend the FCC for taking the first step in returning the internet to the state of permissionless innovation it thrived under until just two short years ago,” Lee said in a statement, adding:

Comments for the public comment period will be accepted until August 16, Gattuso said, with the final rule change likely to come in the fall.