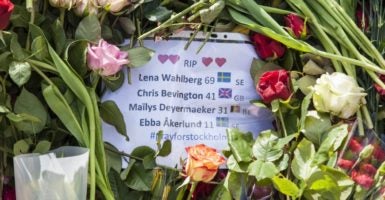 Flowers are left at the scene of the April 7, 2017, Stockholm terrorist attack to honor the victims. (Photo: Helena Larsson / Naturfotografer/ZUMA Press/Newscom)

How Western democracies should respond to terrorist attacks is an ongoing concern. One such dilemma is whether the state should just focus on preventing attacks or whether it has an obligation to challenge the ideology that spurs those attacks in the first place.

In April 2017, Rakhmat Akilov committed a vehicular attack in the center of Stockholm, using a truck to kill five and injure 10.

Four months later, in August, Abderrahman Bouanane killed two people and injured eight in a series of stabbings in the southwestern Finnish city of Turku.

Bouanane, currently on trial in Helsinki, told the court, “I honestly felt like I was controlled remotely … The idea was to keep attacking as long as a head falls.”

Akilov and Bouanane were both asylum-seekers who either had no right to be in the country or were in the process of being deported.

Recently, I visited both Sweden and Finland, speaking to dozens of government officials, police officers, and academics to gain insights into how the countries have responded.

Sweden suffered its first Islamist terrorism attack in December 2010. Taimour Abdulwahab al-Abdaly, an Iraqi, packed explosives into a car in the heart of Stockholm and then detonated his suicide vest in a busy shopping center nearby.

Abdulwahab died, but fortunately, nobody else did. The plot had clear links to a precursor group to ISIS, the Islamic State of Iraq (ISI).

There were only 200 Islamists on Stockholm’s intelligence radar at the time of Abdulwahab’s plot. Now, according to Anders Thornberg, the head of Sweden’s security police, that number is 2,000.

An additional reason for concern is that Sweden has seen about 300 foreign fighters head to Syria and Iraq (although nongovernmental sources speculate the actual number is higher, between 400 and 500). A Swedish Defence University study states that about 150 of them have returned, 100 are still fighting overseas, and about 50 have been killed.

Thankfully, the numbers leaving Sweden have dried up—with only about 10 last year, and 2018 is presumably unlikely to see an increase.

Finland, meanwhile, has about 370 people connected to international terrorism on its intelligence radar, with about 80 going to join the conflict in Syria (about one-fifth of them women).

With a population of between 75,000 and 100,000 Muslims, that’s an unusually high number. About 20 foreign fighters have returned to Finland, and a similar number were killed in the fighting.

Sweden has placed special emphasis on the “prevention of violent extremism” in its counterterrorism strategy, with the intent to “counter and reduce the intent to commit or support terrorist attacks.”

Responsibility for the prevention of violent extremism lies with the Ministry of Justice. Yet responsibility for implementation often lies within Sweden’s 290 municipalities, which have great autonomy over local governance.

There’s concern in Stockholm that while these municipalities are familiar with warning signs for far-right movements, they are much less familiar with radical Islamists.

Finland is also focused on prevention. Integral to that are two complementary government-backed initiatives, Anchor and Radinet.

Anchor, which operates throughout Finland, deals with young offenders by allowing arms of the state that deal with troubled youth—police and social workers, for example—to share data about those individuals.

Radinet is a voluntary program, led by nongovernmental organizations, that seeks to integrate far-right and Islamist extremists into Finnish society.

While these NGOs can get financial assistance from the government, they surprisingly have no obligation to report to the state on the progress of their work with the extremists.

Finland is only interested in preventing acts of violence, not dealing with ideology. As a result, its work on the prevention of violent extremism stresses the importance of dialogue and a willingness to discuss foreign policy, stigmatization, and marginalization—but not Islam or theology.

This focus on grievance over ideas is a mistake. Islamist groups have an endless supply of grievances to work through, and the notion that Finnish foreign policy is causing radicalization is a stretch, to put it politely.

By only focusing on grievances and downplaying the power of ideas, Finland is doomed to misunderstand the nature of the threat.

Finland and Sweden face a challenge of integrating the almost 200,000 asylum-seekers they took in between them in 2015 alone.

The government acknowledges that about 50,000 have no legal right to be in the country, and yet it is resigned to them staying anyway and is attempting to provide housing for these new arrivals. It has also launched job creation and youth education initiatives.

Finland took in 32,000 asylum-seekers in 2015, many of whom are Shia Muslim Iraqis. That has had an unsettling effect on some within the pre-existing Sunni Muslim population in Finland, who fear an effort to shift the ethnic composition of the Muslim community there.

That in turn has led to some levels of hostility toward new asylum-seekers among Finland’s Muslims.

That is just one of the difficulties. Another example cited was that there are also those who were tortured in Iraq living in refugee centers with those who tortured them.

The most striking thing about the Swedish and Finnish responses to the terrorist attacks last year was how little response there was.

There appears to be few regrets within those governments at taking in so many asylum-seekers, which is seen as a global obligation. Perhaps they are right, and they can painlessly integrate so many newcomers into such small populations.

However, there is scarce precedent suggesting such a radical policy can work.

One noticeable consequence of the terrorist plotting is cities’ physical transformation in an attempt to prevent future vehicular attacks.

The area of central Stockholm attacked last year is incredibly well-fortified with barriers. Meanwhile, barriers placed around a Helsinki church last summer after authorities received a tip-off that a vehicular attack was being planned remain in place.

An attack takes place, and barriers go up. Or it’s thwarted and the result is the same. Yet until the policies that led to Sweden and Finland being imperiled in the first place are addressed—excessive levels of immigration and an unwillingness to deal with Islamist ideology—they are destined to require such defenses for many years to come.