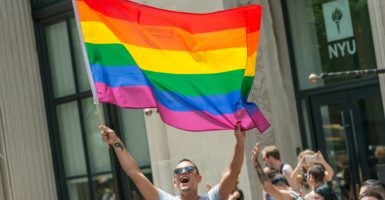 Activists have already leveraged the power of government to drive out faith-based agencies in Massachusetts, Illinois, California, and Washington, D.C. (Photo: Albin Lohr-Jones/Polaris/Newscom)

Oklahoma is just shy of a major victory for children in the adoption and foster care system—but LGBT activist groups are now threatening the state with boycotts if leadership follows through.

Senate Bill 1140 passed the Oklahoma Legislature and is currently sitting on the desk of Gov. Mary Fallin. The bill ensures that faith-based foster and adoption providers can continue to operate according to their religious and moral beliefs as they serve children and families in need.

But now LGBT activist groups like the Human Rights Campaign are attacking the bill, claiming that it “shrinks the pool of prospective parents” and “is a blatant attempt to discriminate against LGBTQ Oklahomans.”

These accusations could not be further from the truth.

SB 1140 has no effect whatsoever on who can adopt. LGBT individuals are free to adopt in all 50 states, and this bill wouldn’t change that. Instead, this bill would maintain the current status of Oklahoma’s child welfare system, where faith-based agencies play a small but crucial role in meeting children’s needs.

As the opioid crisis drives more and more kids into the foster care system, America needs an “all hands on deck” approach to child welfare, where the maximum number of quality providers are available to serve.

In fact, the Department of Health and Human Services found “a particularly strong positive relationship between overdose death rates and foster care entry rates” in various parts of the country—including Oklahoma. In other words, when parents die because of overdoses, their children too often enter the foster care system.

Most states are completely unprepared to meet this influx of children. Foster families are needed now more than ever, but they are in short supply. Eighty percent of prospective foster parents who train with public agencies drop out within the first two years.

And of the remaining 20 percent who persevere, most are motivated by their faith, according to Chuck Johnson, president of the National Council for Adoption.

Here a diversity of providers is key. Not only does the presence of faith-based agencies increase the number of places able to help, but they create unique recruitment opportunities. These agencies can provide personalized resources that make the foster or adoption process less intimidating and more personal, making it easier to recruit and retain families.

So why target these agencies after decades of service?

This is not the first time that activists have used adoption and foster care as a tool to impose their sexual ideology. Activists leveraged the power of government to drive out faith-based agencies in Massachusetts, Illinois, California, and Washington, D.C. These shutdowns did nothing to increase LGBT individuals’ access to the adoption or foster care system. In the end, playing politics with child welfare ended decades of service from trusted providers, reduced both manpower and resources, and displaced thousands of children.

Further, Oklahoma is not the only battleground in this culture fight. Liberal activists have filed lawsuits against faith-based agencies in Michigan and Texas in an attempt to drive out even more religious groups.

This dangerous precedent is now spreading. In Philadelphia, the city suspended its contracts with Catholic Social Services and Bethany Christian Services to investigate whether these agencies were discriminatory—just days after the city released an urgent call for 300 families to provide foster care while children flood in due to the opioid crisis.

These lawsuits and legislative battles are pointless. They do nothing to increase access to adoption or foster care and they only put children’s futures at risk.

Policymakers must meet these challenges with policies that protect a diversity of providers. Commonsense solutions like SB 1140 at the state level or the Child Welfare Provider Inclusion Act would shore up these protections and enable the maximum number of agencies to serve kids and families.

Oklahoma has a golden opportunity to do something for kids in need. The state should put down the weapons of the culture war and prioritize children’s best interests.