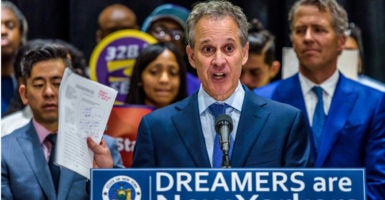 “When the Trump administration puts special interests before public health and our environment, we’ll take them to court—and we will win,” Eric Schneiderman says.

“As we’ve proven again and again, when the Trump administration puts special interests before public health and our environment, we’ll take them to court—and we will win,” Schneiderman said April 23.

And Saturday, Schneiderman boasted about taking on the Trump administration in a tweet with comic book art presenting him as a superhero.

But Monday evening, the Democrat resigned as New York attorney general amid allegations that he had beaten and physically abused four women.

#BREAKING: I’m leading 8 AGs against Scott Pruitt’s absurd plan to have the @EPA limit the science it uses to make decisions about our public health and our environment.

First elected to his post in 2010 after eight years in the state Senate and seen as a contender for governor, Schneiderman made himself a leading figure among states challenging some of Trump’s biggest initiatives.

Touting his lawsuits against the Trump administration on the travel ban, environmental issues, immigration, and other matters, Schneiderman embraced his stature as a “resistance” figure. In a February video made for the leftist MoveOn.org to encourage voting in local elections, he said: “If you really, truly want to be part of the resistance, this is where the fight lives.”

“As Schneiderman leaves office in disgrace, his impact and influence with activist Democrat state attorneys general and candidates cannot be overstated,” Rutledge told The Daily Signal in a prepared statement.

Schneiderman filed 100 lawsuits or administrative actions against the Trump administration in 2017, The Daily Caller News Foundation reported in December.

“Schneiderman was the ringleader of the activist attorneys general that sought to use the courts to pursue their liberal political agenda,” Rutledge said. “While there will be a reckoning for those who directly benefited from his political power, unfortunately there remain plenty of activist Democrat attorneys general who will push each other down to lead the charge against the rule of law.”

In a public statement Tuesday, the group’s executive director, Sean Rankin, said it opposes “any and all” forms of domestic and sexual violence.

“Our state attorneys general have a special and powerful responsibility in creating that culture—we must hold them to the highest standards of accountability,” Rankin said. “We will continue to support our Democratic attorneys general in their commitment to stand with survivors of domestic and sexual abuse, in addition to their ongoing work in protecting civil rights, keeping our communities and families safe, and serving as the people’s lawyers.”

Schneiderman announced his resignation Monday in one statement and in another, denied the four women’s allegations of physical abuse, first reported by The New Yorker magazine.

“While these allegations are unrelated to my professional conduct or the operations of the office, they will effectively prevent me from leading the office’s work at this critical time,” Schneiderman said in a statement from the attorney general’s office. “I therefore resign my office, effective at the close of business on May 8, 2018.”

In a tweet that night from his private twitter account, Schneiderman asserted: “I have not assaulted anyone. I have never engaged in non-consensual sex, which is a line I would not cross.”

Schneiderman, 63, routinely took credit for “leading” lawsuits among other attorneys general against the Trump administration—and in many cases, they filed such litigation in a federal court in New York.

.@realDonaldTrump’s attempt to rollback greenhouse gas emissions standards for cars is totally unjustifiable under the facts and the law.

The legal standoff between Schneiderman and Trump predates the 45th president’s taking office.

In 2013, Schneiderman sued the businessman and real estate developer, alleging fraud in the case of Trump University. In late 2016, after the presidential election, Trump settled for $25 million. A federal court finalized the settlement last month.

The president was noticeably silent on Twitter about Schneiderman after the announcement. But citizen Trump predicted in 2013 that Schneiderman would suffer a fate similar to two other New York politicians, former Gov. Eliot Spitzer and former U.S. Rep. Anthony Weiner, both Democrats who resigned over sex scandals.

Weiner is gone, Spitzer is gone – next will be lightweight A.G. Eric Schneiderman. Is he a crook? Wait and see, worse than Spitzer or Weiner

In early April, Schneiderman announced he would lead a coalition of attorneys general from 17 states and the District of Columbia, plus mayors, to sue to block the Trump administration from asking about citizenship status in the 2020 census.

“With immigrant communities already living in fear, demanding citizenship status would drive them into the shadows, leading to a major undercount that threatens billions in federal funding for New York and our fair representation in Congress and the Electoral College,” Schneiderman said in announcing the lawsuit. “I’m proud to lead this coalition in the fight for a full and fair census.”

More plaintiffs joined the suit by early May.

We won’t allow the Trump admin to recklessly abandon nearly 70 years of practice in an attempt to jeopardize the basic rights of those we represent.

The Trump admin couldn’t repeal the #ACA in Congress—but they are doing everything in their power to sabotage NYers’ ability to get the health care they need.@MassAGO and I are leading a coalition of 17 AGs opposing the proposed expansion of so-called association health plans. pic.twitter.com/BxhLuEWE26

Schneiderman announced in February that he would lead a multistate lawsuit to prevent the Trump administration from rolling back the Waters of the United States regulation promulgated by the Obama administration’s Environmental Protection Agency.

“Over the last year, we have not hesitated to fight back against the Trump administration’s assault on the law and New Yorkers’ fundamental right to clean water, air, and environment. We won’t stop now,” he said in the announcement.

In December, Schneiderman sued to stop the rollback of net neutrality regulations of the internet by the Federal Communications Commission.

I will sue to stop the FCC’s illegal rollback of #netneutrality. New Yorkers and all Americans deserve a free and open internet. pic.twitter.com/BNW7TDsp4z

Also in December, he led a coalition of 12 attorneys general in a statement supporting a lawsuit to protect the right of women who are illegal immigrants to get abortions.

That same month he joined 13 other states to sue the Environmental Protection Agency for not designating more areas as having unhealthy air by missing an Oct. 1 deadline.

Last fall, the Trump administration announced plans to phase out former President Barack Obama’s Deferred Action for Childhood Arrivals program, or DACA, which shielded from deportation an estimated 800,000 persons brought to the country illegally as children by their parents or others.

He announced he would lead 16 state attorneys general to sue the Trump administration to maintain DACA, an action filed in federal court in New York.

“He clearly has, not just in the resist Trump movement and the lawsuits against the administration, but also in the absurd lawsuits filed against Exxon and other companies supposedly saying they’re responsible for global warming,” von Spakovsky told The Daily Signal. “So his being gone may take some of the energy and enthusiasm out of that movement.”

California’s Becerra hasn’t shown himself to be the type of lawyer to take the lead in Schneiderman’s absence, von Spakovsky added.

“This probably won’t make any difference in the litigation itself, but it may make a difference behind the scenes, where the folks behind all of this are doing their planning and coming up with their strategies and tactics,” von Spakovsky said. “He’s not going to be there.”