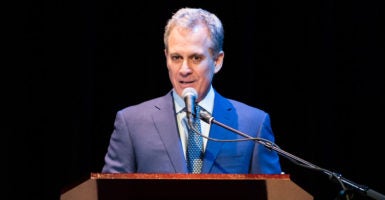 “We try and protect New Yorkers from those who would do them harm,” New York Attorney General Eric Schneiderman says. (Photo: Michael Brochstein/ZUMA Press/Newscom)

The New York attorney general has transformed his office into a bastion of the resistance movement by taking 100 legal or administrative actions against the Trump administration this year.

“We try and protect New Yorkers from those who would do them harm,” Schneiderman told The New York Times in a recent interview. “The biggest threat to New Yorkers right now is the federal government, so we’re responding to it.”

Though other state attorneys general have taken to challenging President Donald Trump in court, Schneiderman has taken a particularly aggressive stance, bolstering his political capital in a virulently anti-Trump state.

Enmity between the pair goes back a long way, beginning in earnest when Schneiderman spearheaded the investigation into fraudulent practices at Trump University in 2014. Since that time, Trump has referred to the attorney general as a “total lightweight,” a “total loser,” and “the nation’s worst AG.” Trump has also suggested Schneiderman should submit to a drug test because the attorney general “cannot be a cokehead.” Trump reached a settlement in the Trump University case in 2016.

Schneiderman’s office has maintained a rapid pace, challenging the administration at every turn. Most recently, New York joined 14 other states in suing the Environmental Protection Agency “for failing to meet the Clean Air Act’s statutory deadline” on air pollutant levels. The state also recently sued the administration for refusing to pay for a 17-year-old illegal immigrant’s abortion.