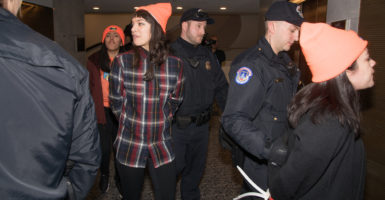 An organization whose parent group received taxpayer funds developed and offers an app that allows illegal immigrants to notify family and lawyers when they encounter law enforcement.

The app, a computer program designed to run on a cell phone or other mobile device, also allows the user to warn other illegal immigrants when authorities are in the neighborhood.

A division of the Justice Department awarded at least $206,453 to the National Immigration Law Center, which advises illegal immigrants on their rights, according to records obtained by Judicial Watch.

The Office of Justice Programs awarded the grants between fiscal years 2008 and 2010, the records cited by the conservative government watchdog group show. That would overlap the administrations of both Presidents George W. Bush and Barack Obama.

One of the projects of the National Immigration Law Center is United We Dream, which describes itself as a youth program for “undocumented” immigrants.

United We Dream created the smartphone application, or app, which is called Notifica.

Need a secure way to message your family in a time of emergency? @UnitedWeDream’s Notifica app will make sure they get the message (and anyone else who needs it).

? Text “Notifica” to 877877 to get a download link #HereToStay! pic.twitter.com/aCBAzY5Lbh

In a request filed under the Freedom of Information Act, Judicial Watch seeks to determine whether the federal government has given any other money to the National Immigration Law Center, said Irene Garcia, editor of the Judicial Watch blog and the group’s Spanish media liaison.

“Judicial Watch believes that using the app to warn someone could definitely be considered abetting, since it is helping lawbreakers—illegal immigrants—avoid law enforcement,” Garcia told The Daily Signal.

“We are working on getting the latest OSF [Open Society Foundations] funding, but essentially OSF is United We Dream’s biggest financial supporter,” Garcia said. “We are also in the process of obtaining the latest U.S. funding records. It appears that United We Dream may receive money under different umbrella groups.”

Neither United We Dream nor the National Immigration Legal Center responded to phone and email inquiries from The Daily Signal.

The Laredo Morning Times quoted Adrian Reyna, director of membership and technology strategies for United We Dream, as saying that “when something actually happens, most people don’t know what to do at that moment.”

The Texas newspaper also reported that United We Dream is working on a second version of Notifica that will include the ability to use more languages besides Spanish and English.

The second version, set to be released this summer, would include Vietnamese, Korean, and Chinese. The updated app also will be able to determine where an illegal immigrant is being detained, the newspaper reported.

United We Dream pushes to give legal status to so-called Dreamers, illegal immigrants brought to the United States when they were children. The organization, which has a hotline, advises illegal immigrants against cooperating with agents from U.S. Immigration and Customs Enforcement.

In a press release, the group says: “United We Dream calls on our communities to defend their rights, not open the door to ICE, and to report ICE activities to the United We Dream MigraWatch hotline.”

The April release adds: “United We Dream has also developed the mobile app, Notifica, which immediately alerts your loved ones and legal advocates to the user’s location in cases of detention. Text ‘Notifica’ to 877-877 for a link for download.”

The Soros-backed Open Societies Foundations don’t have a direct role in the app, but doesn’t find it objectionable, said Angela Kelley, the senior strategic adviser on immigration at the Open Society Foundations.

“The Open Society Foundations does provide general support to both United We Dream and the National Immigration Law Center. The foundations do not specifically fund this app,” Kelley told The Daily Signal.

“The app allows immigrants who face detention to notify loved ones of their whereabouts, and encourage them to contact a lawyer,” Kelley said. “It is a way of ensuring that people confronted by immigration enforcement are aware of their rights, are afforded due process, and have access to legal counsel in their hour of need.”