Federal Employee Vaccine Mandate Could Result in Thousands of Firings. Here’s What That Means for Government Functions. 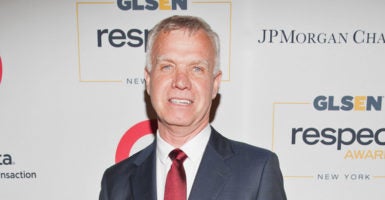 Pennsylvania was founded by William Penn as a haven for political and religious diversity. Now, a Pennsylvania bill poses an existential threat to that history of freedom and tolerance by reinforcing a disturbing trend already happening at the local level.

Last year, the state Senate introduced Senate Bill 613, an act that would amend the Pennsylvania Human Relations Act to include sexual orientation and gender identity as a protected class in anti-discrimination statutes.

At face value, the bill promises freedom from discrimination for all Pennsylvanians. But if the liberal activists promoting the bill have their way, SB 613 would punish Pennsylvanians for their religious and moral beliefs.

SB 613 is supported by none other than Tim Gill, the man dubbed “the megadonor behind the LGBTQ rights movement” by Rolling Stone magazine.

When Rolling Stone profiled Gill last June, he disclosed his strategy to use his $500 million fortune to agitate for state nondiscrimination laws that pit LGBT activists against religious Americans.

“We’re going into the hardest states in the country,” he told the magazine. “We’re going to punish the wicked.”

In 2015, a Gill front group, Pennsylvania for Economic Competitiveness, and Gill himself collectively donated $15,000 to the Reform PA PAC when the Fairness Act, a similar sexual orientation and gender identity law, made its debut.

Another Gill front group, Pennsylvania Competes, joined forces with the Human Rights Campaign in 2015 to the same end.

Then in 2017, SB 613 was introduced as a Senate counterpart to the Fairness Act, which was reintroduced in the House as HR 1410.

Gill’s plan to “punish” is already coming to pass in the Keystone State, even without a statewide law barring discrimination on the basis of sexual orientation and gender identity. Cities and towns have already passed 43 local ordinances that can be used to target residents for their beliefs.

Just last month, the city of Philadelphia halted the placements of two Christian foster care agencies—Catholic Social Services and Bethany Christian Services—because of their religious beliefs about the nature of the family. The agencies are now under investigation for discrimination under the city’s Fair Practices Ordinance, the city’s sexual orientation and gender identity policy.

Even the very possibility of such a law being implemented can be sufficient to drive regular residents out of the public square for fear of being accused of discrimination.

Take W.W. Bridal in Bloomsburg. The Christian owners of this business closed their doors at the end of March because the city is likely to pass such an ordinance.

The city had considered passing such an ordinance in 2014, but it failed to clear the city council. This earlier initiative may have been designed to target W.W. Bridal for its biblical view of marriage.

Even without an ordinance, the owners had no choice but to close: Activists attacked the store’s reputation by posting fake Yelp reviews and have made threats to burn the business down or shoot the owners in the head.

Forced to choose between their livelihood and their beliefs, the owners chose the latter. “We will not be forced by government, local ordinances, or bullies to participate in something that goes against our faith,” the business stated in a Facebook post.

Average Pennsylvanians are already vulnerable to losing their livelihoods not for holding “animus” against LGBT people, but for holding a long-established, reasonable belief about marriage. A state law could only make matters worse.

Sexual orientation and gender identity laws don’t have to be interpreted this way. Anti-discrimination laws are supposed to be used to protect people, not to attack them. They should be shields, not swords.

States that already have such laws on the books can and should interpret them in a nuanced way that respects different moral and religious beliefs about sexuality.

Ultimately, these policies will have a chilling effect on society. Even when not directly weaponized against people with traditional beliefs, these policies still stigmatize the traditional view of marriage, which has been upheld by reasonable people of good will for thousands of years.

In the long run, SB 613 would leave regular Pennsylvanians constantly vulnerable to be targeted by the government for their beliefs. This enduring threat to their livelihoods would only perpetuate animosity between both sides of the marriage debate.

Sexual orientation and gender identity laws are not the path forward for mutual tolerance. Pennsylvania should uphold its rich history of peace and diversity and abandon this dangerous initiative.

Note: This article has been corrected to reflect when Senate Bill 613 was introduced.