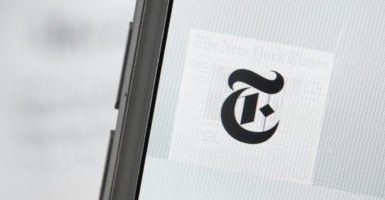 I pointed out that the book, “The Rational Bible: Exodus,” the first volume of my commentary on the first five books of the Bible (the Torah), did not appear on The New York Times best-seller list even though it was:

And, as of this writing, “The Rational Bible” fluctuates between the top 10 and top 40 of all books—on all subjects—on Amazon.

>>> My Quest to Help Americans Rediscover the Bible

There are, therefore, only two possibilities: All other indicators of book sales in America, including all objective ones (Ingram and BookScan), are wrong, or The New York Times best-seller list is wrong.

Apparently, such evidence and other arguments I offered were strong enough to compel The New York Times to defend itself in a series of tweets from NYTimes Communications. The liberal internet site Mediaite headlined its story on the tweets “NY Times PR Roasts Conservative Author Dennis Prager For ‘Hypocrisy’ in Rare and Stunning Tweetstorm.”

The Times tweeted, “Political views held and expressed by authors have no bearing on our rankings.”

Few conservatives in the book industry believe that. For example, Regnery Publishing, the publisher of my book, announced a year ago The Times list is so ideologically biased Regnery would no longer announce whether any of its authors are New York Times best-selling authors.

And even fewer in the religious community believe it: Does The New York Times regularly include sales data from Christian bookstores, for example?

But even if one does believe the Times has no ideological agenda, its best-seller list is still the most inaccurate of all major best-seller lists. That’s why none of the Times’ tweets contradicted anything I wrote. Instead, the Times did what progressive institutions and individuals routinely do when differed with: attacked the individual.

“Hypocrisy alert,” the Times tweet warned. “@DennisPrager wrote a dishonest essay about our best-sellers lists. He claims, ‘I have long known it isn’t a best-seller list, and I don’t pay attention to it.’ Though he lists ‘NYT best-selling author’ on his twitter bio and his own site.”

Hypocrisy alert. @DennisPrager wrote a dishonest essay about our best-sellers lists. He claims, “I have long known it isn’t a best-seller list, and I don’t pay attention to it.” Though he lists ”NYT best-selling author” on his twitter bio and his own site. pic.twitter.com/SAm5zanslx

Actually, I did write that a previous book of mine was on the Times list. And I don’t pay attention to the list unless I have just published a book.

Anyway, what connection is there between my alleged hypocrisy and whether The New York Times best-seller list is legitimate? The answer, of course, is there isn’t one.

What the Times did is what the left usually does to those with whom it differs and cannot effectively respond to—slapped on a morally defective label. It’s so common a practice I long ago gave it an acronym: SIXHIRB, Sexist, Intolerant, Xenophobic, Homophobic, Islamophobic, Racist, Bigoted. “Hypocrite” fits right in.

Most importantly, the Times tweets label my column as “dishonest” and declare that it “has no basis in fact and includes a number of factual inaccuracies.”

Yet the Times provided but one—dubious—example of an inaccuracy: It said it doesn’t have Jordan Peterson’s No. 1 best-selling nonfiction book anywhere on its list because the book is published in Canada.

The reason the Times doesn’t offer any other example of inaccuracy in what I wrote is that it can’t. Instead, it offers this statement: “Rankings on different organization’s best-seller lists vary for a variety of reasons. Other organizations rely on book sales from different reporting stores and reporting periods.”

In other words, The Wall Street Journal, Publishers Weekly, USA Today, Ingram, and BookScan are all wrong. Only The New York Times best-seller list is right.

I am sure most of its readers believe that. But most of the country doesn’t. And so long as The Times refuses to open up about how it arrives at its unique numbers, no one should believe it.