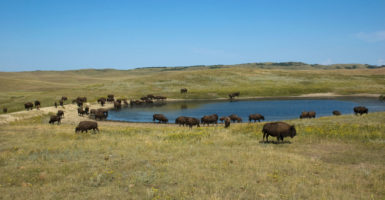 The Department of the Interior has worked steadily to increase opportunity and access to the federal lands and resources under its purview. Earlier this week, the department released a comprehensive list of its accomplishments thus far in 2018.

One area that Interior Secretary Ryan Zinke should now turn his attention to is the morass of bad policies that have for years restricted opportunity for Native Americans on their own lands.

According to Terry Anderson, senior fellow at the Property and Environment Research Center, “In 2012, the Department of the Interior estimated that Indian lands have the potential to produce 5.35 billion barrels of oil, 37.7 trillion cubic feet of natural gas, and 53 billion tons of coal.”

Despite these vast resources, many tribal lands remain mostly undeveloped. “Eighty-eight percent of Indian lands with energy potential have yet to be developed,” according to Shawn Regan of the Property and Environment Research Center.

While some tribes have chosen not to develop resources, many—among them the Crow tribe—find it nearly impossible to do so in the face of the federal government’s overregulation and heavy-handed land management.

Indian reservations are considered federal lands. Those lands are held in trust by the federal government, meaning the government manages the lands for the benefit of the Native American populations.

This approach dates back to 1831, when then-Chief Justice John Marshall’s decision in Cherokee Nation v. Georgia enshrined the idea of paternalistic federal oversight of Indian lands. “Their relations to the United States resemble that of a ward to his guardian,” he wrote.

To this day, the federal government remains involved in almost every aspect of Native American lives—but what are the results? Answer: A complicated hodgepodge of regulations that make land development too hard.

Regan says, “On Indian lands, companies must go through at least four federal agencies and 49 steps to acquire a permit for energy development, compared to as few as four steps off reservations.” Many outside investors avoid this mess altogether.

Tribal lands, just like states, have shown time and again that they can do a better job at developing the lands than the federal government.

According to another report by the Property and Environment Research Center, “From 2009 to 2013, mineral production from federal lands earned $19.76 for every dollar spent,” while states’ returns were $138.08 per dollar spent. Similarly, “when tribes are afforded more control over natural resource management, the result has been significantly better management and higher output.”

To ensure that the tribal lands are used most effectively, several policy changes are needed. The Property and Environment Research Center released a report that outlined several policy recommendations. They include giving tribes more negotiating power and control over the lands, and streamlining the application processes to do so.

The federal government is failing in its management of Indian reservations. But reducing regulatory red tape and allowing economic opportunity through energy development could provide a powerful answer to challenging issues, such as the opioid crisis ravaging Native American communities, which Zinke has tried to address through a new task force.

Regardless of the current desires of tribes, the federal government must make every step to ensure that they have the self-determination to decide whether or not to develop their lands.