How Washington Has Hurt Native Americans 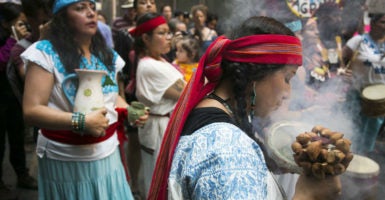 After a rally and march, protestors stand outside the building where the Army Corps of Engineers works out of in Chicago. The protestors, many of whom are Native Americans, demanded an end of construction for the Dakota Access pipeline, Sept. 9, 2016. (Photo: Rick Majewski /Zuma Press/Newscom) 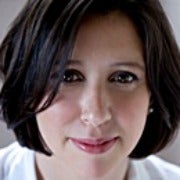 Naomi Schaefer Riley is a weekly columnist for the New York Post and the author of six books, including "The New Trail of Tears: How Washington Is Destroying American Indians."

If the idea behind U.S. policy in the early 20th century was either to help Indians or to help white settlers, the easiest way of accomplishing this would’ve been to grant a simple title to the land to either group and let each do what they wanted.

But, “had the land been given directly to Indians or whites, what role would there have been for the Office of Indian Affairs?” Terry Anderson, author of “Sovereign Nations or Reservations?”, asks pointedly.

Although the Dawes Act was ostensibly implemented with the idea of making Indians independent and regular citizens of the United States, Washington’s oversight of them increased significantly the longer the policy was in place.

>>> Buy “The New Trail of Tears: How Washington Is Destroying American Indians.”

From 1900 to 1920, the number of employees grew from 101 to 262. (Today, there are about 9,000 employees at the Bureau of Indian Affairs and the Bureau of Indian Education.) This result, says Anderson, “is hardly surprising as bureaucrats are highly unlikely to sit back and watch their mission and jobs wither. … The BIA found its raison d’être with the passage of the Indian Reorganization Act in 1934.”

Now the goal was no longer to make Indians independent of federal oversight, but to permanently enshrine that federal oversight. In the name of protecting Indians from rapacious white people, the federal government has made itself indispensable to Indians’ daily economic lives.

In every community I visited, a few people … understood that no amount of federal funds was going to stop the poverty and dysfunction.

Any major development, whether real estate or natural resources, involves such complex negotiations that it’s rarely worth the cost.

Moreover, the federal government determined that land owned by individuals would be inherited equally by their children. It’s possible for an individual to stipulate otherwise in a will, but as Ivan Small and plenty of other Indians have confirmed to me, wills weren’t a part of traditional Indian culture, and few people ever wrote one.

>>> Naomi Schaefer Riley will be speaking at The Heritage Foundation about “The New Trail of Tears” at noon ET Friday, Sept. 16. RSVP or watch the live stream here.

The result is that “throughout Indian Country, most allotments have been subdivided and redivided so many times that they are worthless to the nominal owners,” asserts Fergus Bordewich, author of “Killing the White Man’s Indian.”

He notes that in the early ’90s, the chairman of the Omaha tribe was receiving “a total of $2.40 annually for his share of a family allotment whose ownership is splintered among more than two hundred heirs. Much land that is Indian-owned on paper has in fact become so fragmented that to be made economically viable at all, it has had to be leased out by the Bureau of Indian Affairs to white farmers and ranchers.”

Because Indians don’t own their land—or, in most cases, their homes—they can’t get credit, making it extraordinarily difficult for them to set up a small business. Conrad Stewart, who chairs the National Resources Infrastructure for the Crow tribe, sums up the situation: “We are the highest regulated race in the world.” Not only have individual American Indians been regulated into a kind of paralysis, larger economic projects on the reservation have all but stopped as a result of federal oversight.

If property rights on reservations were well defined, it would not only improve the housing stock and the general appearance of these communities, but also significantly boost economic development. As Anderson and Shawn Regan of the Property and Environmental Research Center wrote in 2013, “Crossing into reservations, especially in the West, reveals islands of poverty in a sea of wealth.”

Crows and Northern Cheyennes sit on some of the largest oil, gas, and coal reserves in the country. Indian reservations, Anderson and Regan note, “contain almost 30 percent of the nation’s coal reserves west of the Mississippi, 50 percent of potential uranium reserves, and 20 percent of known oil and gas reserves”—resources worth nearly $1.5 trillion, or $290,000 per tribal member. Tragically, “86 percent of Indian lands with energy or mineral potential remain undeveloped because of federal control of reservations that keeps Indians from fully capitalizing on their natural resources if they desire.”

In order to tap into those reserves, Indians (whether the land is tribally held or individually held) must follow a 49-step process. These steps involve the Bureau of Land Management, the Department of the Interior, the Department of Justice, and the Commerce Department, explains an exasperated Stewart.

And it can take months, if not years, for each step to be approved. Just to dig a hole, he says, requires a $6,500 up-front payment for an application for a permit to drill (APD).

Compare that, Stewart says, to the process just off the reservation, which requires about $125 and 15 minutes for the APD and then a mere five-step process for the permit to be approved.

Stewart explains that although the tribe has had a coal mine since 1973, little progress has been made in getting resources out of the ground. The mine is the second largest in the nation, with 3 percent of the world’s coal reserves, but it extracts only 5 million tons a year. A few miles off the reservation at Powder River, the yearly extraction is close to 120 million tons a year.

It’s true that not every reservation is enthusiastic about the idea of natural resource development. The Northern Cheyenne are conducting a referendum on the issue, and though Ivan Small believes most tribe members would be in favor of it, he suggests that the tribal government is overly influenced by people concerned about the environmental impact.

If all jobs are government jobs, then they become all the more important as prizes to be given to supporters or simply to extended family.

Winfield Russell, of the Northern Cheyenne tribal council, says he worries that development of the land “will undermine or destroy Native culture.” Russell says he’s not taking a position on the issue, but he sees a strong connection between the untouched land and the tribe’s spiritual values. Unlike many other tribes, he says, “we’re still strong here as far as our ceremonial culture and spirit on the reservation. We still have our covenant here.”

To know just how much the economy on the reservation depends on public funds, one need only learn the effects that the federal government shutdown in the fall of 2013 had on Indian reservations.

Take the Crow tribe. Some 364 Crow members, more than a third of the tribe’s workforce, were furloughed. A bus service, the only way some Crows are able to travel across their 2.3 million-acre reservation, was shuttered. A home health care program for sick tribal members was suspended.

The Yurok tribe in Northern California relies almost solely on federal financing to operate. Its reservation has an 80 percent unemployment rate. As a result of the shutdown, the tribe furloughed 60 of its 310 employees, closed its child care center, and halted emergency financial assistance to low-income and older members. Financing for a program that ensures clean drinking water on the reservation ran low.

These tribes are so dependent on the federal government that without money from the Bureau of Indian Affairs, their economic activity comes to a complete halt and their members may not have access to clean drinking water.

Despite the vast amount of federal money that does usually flow to these communities, there’s little accountability. Though there were some reforms in the 1970s, many tribal governments are rife with corruption. And the lack of a private economy makes things worse. If all jobs are government jobs, then they become all the more important as prizes to be given to supporters or simply to extended family.

Still, in every community I visited, a few people like Small understood that no amount of federal funds was going to stop the poverty and dysfunction. What they longed for wasn’t more money. They didn’t care for more apologies or hand-wringing from white folks in Washington. What they wanted was what Massachusetts Sen. Henry Dawes once promised their people—emancipation.

This is an excerpt from “The New Trail of Tears: How Washington Is Destroying American Indians,” courtesy Encounter Books.