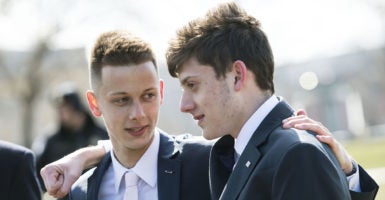 I am working on having 4 prominent speakers, one every 15 minutes, go live on Facebook at 10:00 AM-11:00 AM on Friday, to discuss ways to save lives without infringing on 2A and the importance of mental health and not bullying.

Kashuv, 16, tweeted that the goal is to “discuss ways to save lives without infringing on [the Second Amendment] and the importance of mental health and not bullying.”

Apparently, according to people at my school, Fridays school walkouts were approved by the school board – the same school board that blocked @charliekirk11 from coming and said they're not letting MSD get political on campus. ?

Originally, Kashuv planned to bring Kirk to Marjory Stoneman Douglas High School in Parkland, Florida, on Friday for a discussion of the Second Amendment.

However, the school blocked Kirk from coming on the grounds that “non-school sponsored, student-initiated guest speaker assemblies/meetings are not permitted to take place on campus,” according to a spokeswoman with Broward school district, reported the Sun Sentinel.

Apparently, according to people at my school, Fridays school walkouts were approved by the school board – the same school board that blocked @charliekirk11 from coming and said they're not letting MSD get political on campus. ?

Kirk spoke to “Fox & Friends” Sunday about his intended message, had he been allowed to speak in Florida.

“My mission would not have been to offend. I did not want to make anyone feel uncomfortable, but instead … here’s what really troubles me. Ever since that horrific shooting, the national conversation predominantly from students from that school has been about gun confiscation, about taking people’s guns away,” he said.

Kirk went on to say that conversations about the law enforcement failures at state and local levels are important to address, even though the left wants to stay focused on gun control.

Another Parkland student, David Hogg, is promoting a walkout Friday.

The #NationalWalkOut is happening on 4/20 (Friday) in 1100+ schools across the country — Walkout as a community to stand up against gun violence. The people of Columbine would like you to follow your demonstration with community service. #DemandChange #NationalSchoolWalkout

Kashuv confirmed to The Daily Signal that Kirk will be coming to Parkland on Tuesday, April 24 to speak off campus to students.