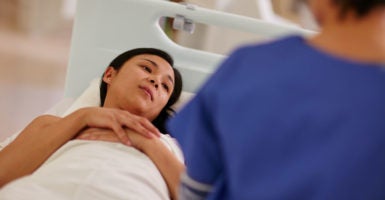 Earlier this month, Hawaii became the sixth state in the U.S. to legalize physician-assisted suicide.

Proponents of the law hail the move as a step toward “death with dignity,” but this could not be further from the truth. Physician-assisted suicide is a direct attack on human dignity.

Every human life has value, not because of what one does, but because of who one is—made for reason, freedom, to love, and to be loved. Physician-assisted suicide cuts at the heart of human dignity by dismissing some lives as not worth living.

The idea that some human beings are disposable shakes the very foundations of a free and equal society. Physician-assisted suicide sets off a chain reaction that extends well beyond the health care context. It harms all of society in a host of ways—it corrupts the practice of medicine, destroys relationships, and paves the way for even greater evils.

In corrupting the meaning of medicine, physician-assisted suicide compromises the patient-doctor relationship. When medical healers are also agents of death, patients can no longer trust that their physician will be unilaterally committed to their life and health.

Physician-assisted suicide also leaves patients vulnerable to pressure to end their lives, not only from their doctor or insurance provider but from family members. Families have intergenerational responsibilities to look after the young, the sick, and the aged. But the normalization of physician-assisted suicide destroys these intergenerational ties by encouraging families to view the elderly or disabled as burdens, a view which patients may then internalize themselves.

This weakening of the young’s obligations to the old harms culture on a grand scale. Communities are made up of families, and as individual attitudes shift away from providing care to relatives in need, so too our society shifts away from an attitude of compassion toward those who are suffering.

Even beyond these negative cultural effects, the laws themselves often come with gravely insufficient safeguards for patients.

For instance, Hawaii’s new law requires waiting periods, witnesses to written requests, and sign-offs from physicians, yet these do little to protect patients from the pressure to kill themselves and other forms of abuse.

When he signed the Hawaii physician-assisted suicide into law, Democratic Gov. David Ige said, “It is time for terminally ill, mentally competent Hawaii residents who are suffering to make their own end-of-life choices with dignity, grace, and peace.”

But why stop at the terminally ill? The mentally incompetent? When ending one’s life is considered a valid and even ideal option for those who are suffering, why deny that option to others who may be suffering less? Surely anyone who wants to die is already suffering to some degree. Why should they not have the same right to die?

Now that Hawaii has accepted the principle of physician-assisted suicide, there is a clear logical path toward extending it to more and more people—not just to those who choose to die, but also to those society or family believes should die. There is no natural, logical limit to who qualifies for physician-assisted suicide, and pretty soon, the “death with dignity” mentality will expand to include euthanasia.

The Netherlands studies fail to demonstrate that permitting physician-assisted suicide and euthanasia will not lead to the non-voluntary euthanasia of children, the demented, the mentally ill, the old, and others. Indeed, the persistence of abuse and the violation of safeguards, despite publicity and condemnation, suggest that the feared consequences of legalization are exactly its inherent consequences.

You heard that right: Nonvoluntary euthanasia follows almost immediately upon physician-assisted suicide—perhaps even by design.

Wherever it is legalized, physician-assisted suicide sets a troubling precedent for public policy by undermining equality before the law. If our legal system treats a subgroup of people as eligible to be killed, it would seriously compromise the natural right not to be killed. Where might this disturbing legal precedent lead?

A lot is at stake in the debate over physician-assisted suicide. The immediate victims are the most vulnerable in society—the sick and elderly.

But that also means every last one of us is vulnerable: It is only a matter of time before each one of us ages and dies. How many years until our own lives are deemed less valuable?

Ultimately, we all suffer in a culture that fails to honor the dignity of every single human life. We do ourselves a disservice when we fail to empathize with those who are suffering, to do our duty by those entrusted to our care.

There is still time to reverse course. But we must act now before laws like those in Hawaii become the new norm.