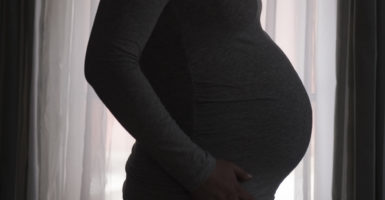 As the opioid epidemic grows in the United States, driving thousands of children into the foster care system, faith-based adoption agencies can help them find loving homes, says Emilie Kao, director of the DeVos Center for Religion and Civil Society at The Heritage Foundation.

But there have been a number of lawsuits filed aimed at shuttering faith-based adoption agencies, claiming they discriminate against the LGBT community.

The ACLU is suing the state of Michigan, for example, to overturn a 2015 state law that shields faith-based adoption agencies from anti-discrimination laws, compliance with which would require them to violate their moral convictions.

Supporters of faith-based adoption agencies are fighting back. Legislation now before Congress, the Child Welfare Provider Inclusion Act, H.R.1881, would pre-empt such lawsuits.

The bill would prohibit any federal, state, or local government agency receiving federal funds to provide child welfare services from discriminating or otherwise taking adverse actions against any child welfare service provider that operates based on faith, religion, or moral convictions.

Those who oppose faith-based adoption agencies say requiring them to allow the LGBT community to adopt would help ease the burden on the foster care system, explained Chuck Johnson, president of the National Council for Adoption. He added, however, that the overburdened foster care system could also be cited in defense of faith-based adoption agencies, since it would be a disservice to shutter an entire group of agencies over ideology.

The Heritage Foundation hosted a panel discussion, “Children in Crisis: Safeguarding Faith-Based Adoption and Foster Care,” on April 9 to discuss problems that would result from closing faith-based adoption agencies.

Along with Kao and Johnson, panelists included Kelly Clemente, a birth mother from Virginia who used a faith-based adoption agency to find a home for her son, and Ryan Bomberger, the chief creative officer of the Radiance Foundation, an educational, faith-based, life-affirming nonprofit.

“I just want you to hear me when I say that it’s not fair to take away a birth mother’s right to a faith-based agency,” said Clemente.

Now 28, Clemente gave birth to her son at the age of 18 and used Bethany Christian Services to help her, physically and spiritually, through her pregnancy. She put her child up for adoption in hopes of giving her son a complete family that could give him the resources she felt the child deserved.

Clemente said she doesn’t know much about political considerations regarding adoption, but became emotional when discussing her positive experience with Bethany’s services and the prospect of the agency being shut down.

A short documentary about Clemente’s experience, produced by Daily Signal contributors, can be seen here.

“If you take Christ out of the conversation,” said Clemente, “you are doing [birth mothers] a disservice.” Mothers giving a child up for adoption might prefer that the child be placed in a home with a heterosexual couple and a Christian belief system.

Bomberger agreed, quoting Scripture and saying that it’s because of the Bible that so many Christians feel compelled to adopt.

Bomberger is biracial and was adopted by a white family, but he said his adoption had nothing to do with his skin color.

Faith-based agencies look beyond skin color because they are more focused on finding loving parents than on race, Bomberger said. He vowed to defend the faith-based agencies that have made lives and families like his own possible.

“I appreciate diversity, but I actually appreciate commonality even more,” he said. “It wasn’t race or ethnicity that tied [my family] together … it was love.”