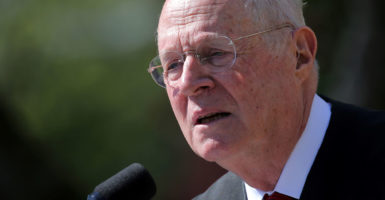 Another look at an internet sales tax is of interest to Supreme Court Justice Anthony Kennedy, here speaking April 10, 2017, during the swearing-in ceremony for fellow Justice Neil Gorsuch in the Rose Garden of the White House. (Photo: Carlos Barria/Reuters/Newscom)

This week marks the start of the Supreme Court’s final oral argument sessions of the current term. The justices will hear arguments in several important cases, including challenges to the constitutionality of administrative law judges, state sales taxes for out-of-state online retailers, and the infamous Trump “travel ban,” making this month one to watch.

Can states require online retailers to collect sales taxes even if they do not maintain a physical presence in those states? That is the question before the court April 17 (fittingly, Tax Day).

The court will consider whether it should overturn Quill Corp. v. North Dakota, a 1992 ruling that forbade states from requiring mail-order retailers to collect a state’s sales tax if they do not have a physical presence within that state, such as a store or employees. Given the rapid growth of online sales, many states complain they are losing out on millions of dollars in lost sales tax revenue.

South Dakota passed a law directly challenging the Quill case by requiring out-of-state retailers to collect sales tax if they sell more than $100,000 of goods or make more than 200 transactions. That led to the current case against Wayfair, Overstock.com, and Newegg, which all refused to comply with the law.

At the Supreme Court, South Dakota argues that Quill’s physical presence test no longer makes sense in light of how the internet has fundamentally changed our society. Wayfair and the other retailers maintain that “borders matter,” and a state’s taxing authority should be restricted to its borders.

Justice Anthony Kennedy has been vocal in the past about possibly overturning Quill—inviting the current challenge in his concurring opinion in Direct Marketing Association v. Brohl. He suggested it was time for the court to reconsider Quill given the “dramatic technological and social changes that ha[ve] taken place in our increasingly interconnected economy.”

>>> Watch as experts discuss the legal and policy implications of this case.

Article II, Section 2, Clause 2 of the Constitution authorizes Congress to “vest the Appointment of … inferior Officers … in the President alone, in the Courts of Law, or in the Heads of Departments.”

Are administrative law judges inferior officers? And who is responsible for their appointments? Those are the issues before the court on April 23.

The U.S. Securities and Exchange Commission uses administrative law judges to preside over enforcement proceedings involving potential violations of federal securities laws. Currently, SEC staff select administrative law judges from a list of candidates compiled by the Office of Personnel Management. However, if they are, in fact, “officers” under the appointments clause, this process would violate the Constitution and the commission itself would be required to appoint the judges.

In the course of an enforcement action, Raymond Lucia challenged the SEC’s process for appointing administrative law judges, but the lower court ruled that the judges do not perform duties that would make them inferior officers.

The third version of President Donald Trump’s infamous travel ban is on the docket for April 25. The court will consider whether Trump’s proclamation suspending aliens’ travel to the United States from eight countries exceeds the president’s authority and violates the establishment clause.

Following challenges to the first two versions of the travel ban, the Trump administration issued a proclamation on Sept. 27 barring travel from several predominately Muslim countries, as well as North Korea and Venezuela. This order lays out the administration’s reasons for restricting travel from each of the countries.

The state of Hawaii and private parties filed a lawsuit claiming that the travel ban exceeds the president’s delegated authority under the Immigration and Naturalization Act, discriminates in issuing visas based on nationality, and singles out Muslims for disfavored treatment in violation of the establishment clause.

The Trump administration defends the proclamation, arguing that the president has broad authority to exclude aliens from entering the country, as the court previously held in Kleindienst v. Mandel, where the president is acting pursuant to authority delegated by Congress and his own constitutional authority over foreign affairs.

After the high court wraps up oral arguments this month, the justices will be hard at work drafting opinions in all the remaining cases. The court’s 2017-2018 term ends in June, so stay tuned for decisions on the travel ban, public employee unions, free speech, and much more.