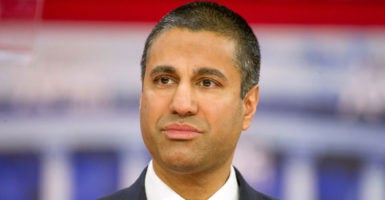 Perhaps dangers to our democracy need to be better defined.

After the popular news site Deadspin released a video showing multiple journalists reading the same lines for local stations owned by Sinclair Broadcast Group, social media became inundated with overheated takes from members of the media, celebrities, and politicians saying that it was a harbinger of authoritarianism.

The most common and silly attack was that Sinclair’s media practices are a “danger to our democracy.”

this is extremely dangerous to our democracy https://t.co/D1T8Z7J2Wn

As I previously wrote in response to this story, it’s the “desire to shut down alternative media, not the editorial slant of private media companies, that would put our institutions and liberty at risk.”

Soon after the Deadspin video went viral, a group of senators wrote a letter to Federal Communications Commission Chairman Ajit Pai, demanding that he investigate Sinclair and possibly pull its broadcasting license because it constitutes a threat to the freedom of the press protected by the First Amendment.

This is a terrible proposal, no matter who it comes from.

Pai’s response to the letter was so perfect that it deserves to be printed in full:

Thank you for your letter requesting that the Commission investigate a broadcaster based on the content of its news coverage and promotion of that coverage. In light of my commitment to protecting the First Amendment and freedom of the press, I must respectfully decline.

A free media is vital to our democracy. That is why during my time at the Commission I have consistently opposed any effort to infringe upon the freedom of the press and have fought to eliminate regulations that impede the gathering and dissemination of news. Most relevant here, I have repeatedly made clear that the FCC does not have the authority to revoke a license of a broadcast station based on the content of a particular newscast.

I understand that you disliked or disagreed with the content of particular broadcasts, but I can hardly think of an action more chilling of free speech than the federal government investigating a broadcast station because of disagreement with its news coverage or promotion of that coverage. Instead, I agree with Senator [Ed] Markey[, D-Mass.,] that ‘[a]ny insinuation that elected officials could use the levers of government to control or sensor [sic] the news media would represent a startling degradation of the freedom of the press.’ I also take this opportunity to reaffirm the commitment I made to several members of the Senate Commerce Committee last year that the Commission under my leadership would ‘not act in a manner that violates the First Amendment and stifles or penalizes free speech by electronic media, directly or indirectly.’

Thank you for your interest, and let me know if I can be of further assistance.

Ultimately, it falls to the American people, not the government or media elites, to determine for themselves which sources to trust. This is in part why the Founders created the First Amendment.

These senators desire to protect the public—yet they believe it’s perfectly acceptable for the government to swoop in and make sure that media companies peddle a certain narrative. That is the truly chilling threat to the First Amendment.