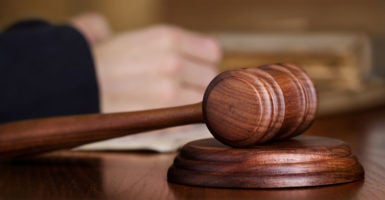 Last week, a federal judge for the District Court for Massachusetts granted a motion to dismiss a lawsuit challenging the state’s prohibition of so-called “assault weapons,” such as the AR-15 semi-automatic rifle.

Judge William Young held that the AR-15 and similar weapons aren’t protected by the Second Amendment, because they were originally designed for military service and because democracy means policymakers—not courts—are best suited to regulate weapons.

In doing so, he authored an opinion taking such extreme liberties with history, judicial precedent, and logic that one can’t help but wonder if he relied exclusively on a SparkNotes summary guide of Second Amendment jurisprudence when drafting his opinion.

Young begins his analysis by stating that “[f]or most of our history, mainstream scholarship considered the Second Amendment as nothing more than a guarantee that the several states can maintain ‘well-regulated’ militias.”

This statement is objectively untrue, unless one considers such brilliant legal minds as James Madison, Samuel Adams, George Tucker, and Joseph Story to be outside the mainstream of constitutional scholarship.

Young supports this highly questionable premise by citing early works by liberal scholar Laurence Tribe, apparently oblivious to the fact that Tribe, while still in favor of stricter gun control measures, recanted his former collectivist-right position, and now concludes that “having studied the text and history closely … the Second Amendment protects more than the collective right to own and use guns in the service of state militias and National Guard units.”

Young cites seminal Second Amendment cases stating that firearms commonly used by law-abiding citizens for lawful purposes are protected, but then inexplicably asserts that the AR-15’s “present-day popularity is not constitutionally material.”

But these gaffes pale in comparison to the two biggest problems with the opinion: Young completely ignores Supreme Court precedent on the proper standard for determining whether a particular firearm is protected by the Second Amendment, and he fails to recognize that—even under the standard he concocts, seemingly out of thin air—the AR-15 would still be protected.

It’s Irrelevant Whether a Firearm Is ‘Military-Style’

Young formulates a novel standard to determine whether a firearm is protected by the Second Amendment: Is the firearm similar to a “military weapon”?

He supports the use of this standard by quoting from Justice Antonin Scalia’s majority opinion in District of Columbia v. Heller, where the late justice appeared to validate a federal prohibition on fully automatic firearms: “It may be argued that if weapons that are most useful in military service—M-16 rifles and the like—may be banned, then the Second Amendment right is completely detached [from the clause concerning ‘a well-regulated militia’].”

But Young’s use of this single sentence ignores context at the expense of fundamentally misinterpreting the main premises of Heller. His interpretation also makes no sense as a Second Amendment standard from a purely rational standpoint.

First, it’s painfully obvious that Young has missed the point of Scalia’s remark.

This is clear from the surrounding paragraphs, which explain that certain restrictions—like the prohibition on firearms possession by felons—are presumptively lawful, as are “sophisticated arms that are highly unusual in society,” but generally used by the military (such as tanks and bombers).

But even if this plain reading were questionable, the court in Caetano v. Massachusetts made this point explicit by stating that the “pertinent Second Amendment inquiry [for whether a weapon is protected] is whether [it] is commonly possessed by law-abiding citizens for lawful purposes today.”

Further, regarding whether a weapon is “dangerous and unusual,” the court held that “the relative dangerousness of a weapon is irrelevant when the weapon belongs to a class of arms commonly used for lawful purposes.”

In other words, whether a firearm is a “military weapon” has absolutely no bearing on whether it is protected by the Second Amendment.

In fact, by simply filling in the language of “AR-15 and similar semi-automatic rifles” for Caetano’s original language of “stun guns,” the answer to whether the Second Amendment protects the weapons now banned by Massachusetts is unequivocal:

[T]he pertinent Second Amendment inquiry is whether [the AR-15 and similar semi-automatic firearms] are commonly possessed by law-abiding citizens for lawful purposes today.

… [More Americans may possess handguns than possess semi-automatic rifles like the AR-15], but it is beside the point. … The more relevant statistic is that ‘[millions of AR-15s and similar semi-automatic rifles] have been sold to private citizens,’ who it appears may lawfully possess them in [most] states.

… While less popular than handguns, [AR-15s] are widely owned and accepted as legitimate means of self-defense, [hunting, and target shooting] across the country. Massachusetts’ categorical ban of such weapons therefore violates the Second Amendment.

… [It is true that law-abiding citizens could use alternative firearms to defend themselves,] “[b]ut the right to bear other weapons is ‘no answer’ to a ban on the possession of protected arms.

Second, even if the Supreme Court hadn’t already articulated a standard in Heller and Caetano, the standard created by Young is logically preposterous. Almost all lawfully owned firearms throughout all of American history have been “based on designs of weapons that were first manufactured for military purposes.”

From the “Brown Bess” smoothbore musket of the American Revolution, to the Colt single-action revolvers of the Civil War, to the Lee Enfield bolt-action rifles of World War I, right up to present-day SIG Sauer P320 standard-issue sidearm, the majority of firearms chosen by law-abiding citizens for lawful purposes were originally designed for military use.

It’s illogical to suppose that, even if the Founders intended the Second Amendment to protect only a collective right to arms for service in the militia, the right wouldn’t protect the very arms most suitable for militia service—those designed as “military weapons,” but nonetheless commonly possessed by civilians.

The AR-15 Is Protected Even Under Young’s New Standard

The most incomprehensible part of Young’s opinion is, perhaps, his attempt to exclude the AR-15 from Second Amendment protections under his novel standard.

According to Young, military-style weapons are those “designed and intended to be particularly suitable for combat, rather than sporting applications.” They include the following characteristics:

Under these criteria, the AR-15 and other semi-automatic rifles are not “military-style” firearms.

Second, semi-automatic rifles sold to civilians lack a capability of selective fire—that is, the capability of being adjusted to fire in semi-automatic, burst mode, or fully automatic firing mode—except for those firearms already heavily regulated under federal law and subject to extensive licensing and Bureau of Alcohol, Tobacco, Firearms and Explosives oversight.

These characteristics don’t make the AR-15 exceptionally suited for military use rather than sporting applications, but exceptionally suited for both military and lawful civilian applications—just like the Hummer’s off-road handling, cargo space, and relative water-proofing make it suitable for both military personnel and civilians to engage in a wide array of lawful activities.

A Disservice to Gun Control Advocates

To be sure, there are many respectable judges who think that the Supreme Court has seriously misunderstood the Second Amendment and scholars who have sincerely held doubts about the legitimacy of an individual right to keep and bear arms.

Young’s opinion is a disservice to these scholars and makes a mockery of more logical—if still erroneous—lower court judges who have upheld similar prohibitions in recent years.

It’s one thing to disagree about the scope of the Second Amendment. It is quite another to so completely disregard context, history, and precedent.

This opinion should be challenged and overturned on appeal.