John Paul Stevens Is Wrong About the Second Amendment, History, and School Violence 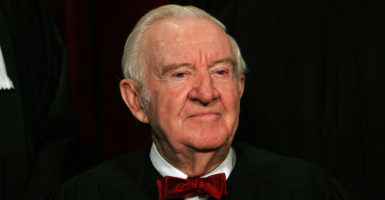 Former Supreme Court Justice John Paul Stevens penned an op-ed in The New York Times on Tuesday, advising that gun control activists at recent demonstrations have not gone far enough in their demands for more restrictions on the right to keep and bear arms.

According to Stevens, it isn’t enough to deny millions of young adults the most effective means of self-defense by raising the minimum age of all firearm purchases to 21.

It isn’t enough, even, to ban the civilian possession of all semi-automatic firearms, thereby reducing law-abiding citizens to reliance on bolt-action rifles, revolvers, and pump-action shotguns.

Stevens informs anti-gun advocates that they must demand a repeal of the Second Amendment.

He insists—as he did in his dissenting opinion in District of Columbia v. Heller (2008)—that the Second Amendment was centered solely on the Framers’ concerns about the threats posed by a national standing army, a concern he labels “a relic of the 18th century.”

He claims that “[f]or over 200 years after the adoption of the Second Amendment, it was uniformly understood as not placing any limits on either federal or state authority to enact gun control legislation.”

He excoriates the National Rifle Association, who he states concocted the theory of an individual right to keep and bear arms in order to perpetrate a fraud against the American public on behalf of gun manufacturers.

He demands the elimination of the Second Amendment in order to make our schoolchildren safer than they have been since the court’s 2008 Heller decision.

These allegations would be much more bearable if they were simply the result of differing interpretations of an unclear history. But this is not the case: Every single allegation Stevens makes is objectively untrue.

1. The Framers—not the NRA—first articulated the Second Amendment as protecting an individual right.

While it is true that the founding generation mistrusted standing armies, the Federalists and Anti-Federalists maintained basic, implied assumptions throughout their disagreements over the drafting and ratification of the Constitution—including the understanding that the new Constitution gave the federal government no authority to disarm the citizenry.

That individuals had an underlying right to keep and bear arms was simply assumed. In the words of prominent Second Amendment scholar Nelson Lund, the debate “was only over the narrow question of whether an armed populace could adequately assure the preservation of liberty.”

Similar understandings can also be found from, among others, George Washington, Thomas Jefferson, and George Mason. These Founders were not articulating an original idea, either, but building on the foundations laid by such scholars as William Blackstone, Cesare Beccaria, and John Locke.

2. The existence of an individual right to keep and bear arms is apparent throughout the nation’s history.

Even a cursory review of the pre-eminent legal scholars in 18th and 19th century America reveals 200 years of overwhelming adherence to an individual right to keep and bear arms:

In other words, Rawle describes an amendment that limits the ability of the state and federal governments to disarm individuals, directly contradicting Stevens’ claim of 200 years of unanimous understanding that it does no such thing.

3. The Heller opinion had absolutely no negative effect on the safety of the nation’s students.

This, perhaps, is the most disappointing assertion of Stevens’ op-ed, because it is an objective, quantifiable fact that America’s schoolchildren are safer today than they have been in over three decades, even while the number of legally owned guns per capita has increased.

While this increase in safety may not be caused by the increase in privately owned firearms and concealed carry permits, there is certainly no increase in danger to attribute to Heller, a case with a relatively narrow holding that individuals have a right to keep operable handguns in their homes for self-defense.

If there is, on any side of the gun control discussion, a fraud being perpetrated, it is by those who portray a false history and promote incorrect facts in order to advocate ineffective policies.

No one fails to mourn the loss of life after tragic shootings. But if we are to honor the victims of gun violence, as Stevens correctly suggests we should, we ought not to manipulate reality in their name.

We should, instead, embrace the facts as we find them, and make our policy decisions based upon knowledge—not emotion and rhetoric.