Trump May Not Yet Have the Wall, but He’s Removing the Welcome Mat for Illegal Immigrants 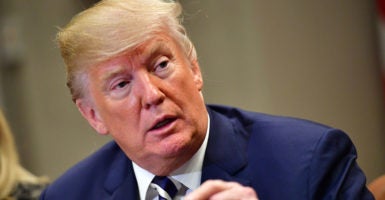 The same pundits who went crazy when he first proposed a wall on the southern border now rail against him for being a failure because he has not achieved that border wall.

But beyond the political theater and tweets, when one considers what Trump has actually done, there is a surprise: The wall may not be there, but neither is the welcome mat to illegal immigrants that President Barack Obama had put out. That’s progress.

I am the grandson of four immigrants to America.

I grew up in a community in suburban New York City that was made up of nearly all immigrant-related families. There were Italians, Irish, Poles, East European Jews, and—it was nearly 60 years ago—even a smattering of Hispanics and Africans.

Every one of them came to America legally. Many took a great deal of time and effort to do it, but they played by the rules. In fact, that’s what made America so different from pretty much every one of their respective “old countries”—namely, things followed the rules.

In regard to immigration today, that principle has broken down. It is even harder to get to America legally, and a huge number of people seem to have said, “The heck with the rules, we’re just going to America on our own terms.”

This has to stop.

It doesn’t matter whether it’s the activist group People Without Borders, or a family who wants a better life than is currently available to them in the “old country.”

The rampant and flagrant rule-breaking has to stop.

And it appears that Trump is determined to do just that. The welcome mat for immigrants is certainly still out, but the one for illegal immigrants is gone.

The recent actions the administration has taken are transforming Trump’s campaign promises into policy.

He has canceled the absurd “catch and release” policy that essentially forces law enforcement to ignore the breaking of federal immigration statutes.

If you get caught, you are no longer getting a hall pass to stay in America until you get a hearing you don’t attend.

Trump is also shoring up our overworked Border Patrol agents with National Guard troops at the border (as both of his predecessors did). This will both free up more agents to apprehend illegal immigrants, and provide them with better intelligence and surveillance, logistics, and overall coverage of the border.

In short, fewer people will be getting into the U.S. illegally, and everyone that is caught will go back.

The administration is also ramping up internal enforcement. Immigration and Customs Enforcement is going after the lawbreakers who already reside in the U.S., starting with those who have (regularly) committed additional crimes against American citizens.

The pressure against the so-called “sanctuary” movement, which prohibits local or state law enforcement agencies from cooperating with ICE, is being increased.

This pressure is not just coming from the feds. Municipalities that are tired of putting illegal immigrants before citizens are rebelling against state governments like California’s. Mayors of sanctuary cities across the nation are being challenged in the same way.

Lastly, the president has slammed the door on a deal on the Deferred Action for Childhood Arrivals program, or DACA. He previously offered an enormously “wide” path to legal citizenship for more “Dreamers” than Congress had even requested, if Congress would only aid him in securing our border.

Congress said “no,” so now he has switched gears. The major motivation for young people to get here has been withdrawn. The political games are over. The Dreamers were sold out by those who claimed to support them.

Taken together, these steps by the president make it clear that the promise of the Statue of Liberty is still in place—but those who sought to pervert it into an open door to those who see no true investment in the collective American dream are wrong.

The welcome mat is there for legal immigrants, but for those trying to force their way in, the door is being shut.