YouTube Shooting Matters, but Not for the Reasons the Media Thinks 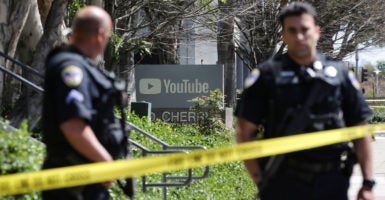 The shooting by a 38-year-old Iranian woman at YouTube's headquarters in San Bruno, California, shows how the media's narratives about mass shootings are wrong. (Photo: Elijah Nouvelage/ Reuters/Newscom)

On Tuesday, a 38-year-old Iranian woman living in Southern California entered YouTube’s headquarters in San Bruno, California, through a parking garage. She then opened fire on company employees, wounding three individuals who she appeared to target at random, before killing herself.

It has been widely reported that the woman frequently uploaded videos onto the social media platform, and had grown increasingly angry at the company over the last year for policies she believed suppressed her pro-vegan messages and unfairly prevented her from receiving ad revenue.

The woman’s family reportedly called local authorities in the days prior to the shooting to warn them about concerns over her state of mind, and filed a missing persons report after she failed to answer her phone for two days.

Her father told reporters that he had informed the police that she might be headed to YouTube because “she hated the company,” though law enforcement has disputed that the woman’s family members mentioned any possibility that she might act violently.

Officers from the Mountain View Police Department found the woman sleeping in her car around 1:40 a.m. Wednesday morning, approximately 11 hours before the shooting. They contacted the San Diego County Sheriff’s Department, which had received the initial report from the woman’s family.

The Sheriff’s Department informed the officers that the woman was considered “at risk” because she had never gone missing like this in the past. The officers spoke with the woman for nearly 20 minutes, but said they did not take further action because she was calm and cooperative.

The Media’s Narrative Is Wrong, Again

As often happens after high-profile acts of violence committed with firearms, many prominent figures used the event to promote a narrative that blames the National Rifle Association and conservatives for another “mass shooting,” and that claims we need stricter gun control measures to prevent these incidents from occurring in the future.

However, nothing about the tragedy supports this narrative.

First, under most widely accepted definitions used by researchers, criminologists, and organizations on all sides of the political spectrum, this incident, while tragic, isn’t a “mass shooting.”

Although there is no one standard definition of the term, even the broadest definitions—such as the one used by the Harvard School of Public Health and the Mother Jones mass shooting database—typically necessitate that four or more individuals be shot, excluding the shooter.

In one sense, it doesn’t matter whether the incident technically qualifies as a mass shooting, especially for the three individuals who were wounded or for any other person affected by the active shooter situation.

But in another sense, it absolutely matters that the media has roundly manipulated the definition of a scary-sounding term in order to promote an agenda dedicated to violating the fundamental constitutional right of law-abiding citizens to keep and bear arms.

Second, it takes an extraordinary amount of mental gymnastics to blame this act of violence on the NRA specifically, or on conservatives generally.

This woman was not a conservative. She was, in fact, extremely liberal—her YouTube videos promoted a vegan lifestyle and denounced capitalism, and she was a dedicated animal rights activist.

She was not a member of the NRA or any other Second Amendment advocacy group.

She lived in a state with one of the most restrictive gun control policies in the nation, which earned the highest rating possible from the Brady Campaign to Prevent Gun Violence—in other words, a state where the NRA and conservatives are almost a non-factor from a legislative standpoint.

Third, California already imposes all of the restrictions that gun control activists typically demand. It has universal background checks, and all private firearm transfers must be conducted through a licensed dealer.

Residents wanting to purchase a firearm must first obtain a five-year Firearm Safety Certificate, which requires passing a written test administered by a state-certified instructor.

Firearms dealers can only sell handguns listed on the state’s Roster of Handguns Certified for Sale, and the vast majority of semi-automatic rifles are prohibited as “assault weapons” because they have magazines exceeding a 10-round capacity.

All firearms purchases require a 10-day waiting period, and there is de facto registration of all firearms.

Despite this, not only was the woman able to commit a “mass shooting” (in the words of the media), but California has not objectively benefited from restricting the Second Amendment rights of its citizens.

Since 2000, when California first began imposing more restrictive firearms legislation, the state has suffered through more mass public shootings—defined as four or more individuals shot in a public place, excluding the shooter and gang-related incidents—than any other state.

It had three times as many mass shootings as Texas, which is roughly equal in population but has an F rating from the Brady Campaign.

It also continues to have an almost identical violent crime rate to Texas, even though Texas has a 15 percent higher rate of individual gun ownership and its citizens can more easily access and carry those firearms.

The relative failure of California’s gun laws is hardly surprising given what we know about gun violence in the United States:

This Tragedy Highlights the Value of Self-Defense

If the lesson from this shooting isn’t that stricter gun control measures save lives or that the NRA and conservatives are responsible for gun violence, then what exactly do we learn from it?

We learn that friends and family members should be taken seriously when they report that an individual they care about is deeply disturbed and might become violently unhinged.

We learn that the government can’t always protect us from dangerous individuals, either because due process doesn’t allow it or because it otherwise fails to take appropriate action.

We learn that making it harder for law-abiding citizens to defend themselves against dangerous individuals makes no one safer in the long run.

As one witness of the YouTube shooting put it before his interview was unceremoniously cut short by the news station: “I didn’t have a gun on me, but I wish I did.”

The date of the shooting at YouTube has been corrected in this article.