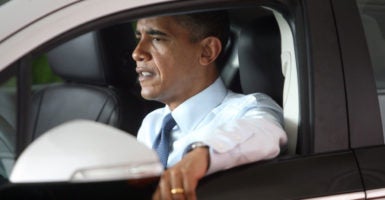 In a victory for American families and consumer choice, Environmental Protection Agency Administrator Scott Pruitt has announced the agency will be revising aggressive fuel economy standards set in place by the Obama administration.

Working with the Department of Transportation’s National Highway Traffic Safety Administration, the EPA will revise efficiency standards for cars and light-duty trucks for model years 2022-2025.

In 2012, the Obama administration aggressively and hastily ramped up the standards, which set a target for 54.5 miles per gallon for model year 2025.

A 2016 Heritage Foundation analysis estimates the Obama fuel economy mandates increased new car prices $6,800 more than the pre-2009 baseline trend, and eliminating the more aggressive standards would save 2025 car buyers at least $7,200 per vehicle.  As my colleagues detail, “Economists and engineers accurately predicted that the [model year] 2016 standards would hurt consumers by at least $3,800 per car.”

Nor would the Obama standards have had a significant “climate benefit”—in fact, there would have been virtually no effects. Increased fuel efficiency often leads to more driving, which cancels out some of the reduced carbon dioxide emissions. But even if fuel economy standards reduced carbon dioxide as much as the Obama administration purported they would, the averted warming would be at most a thousandths of a degree Celsius by the year 2100.

In fact, when the EPA and the Transportation Department implemented the first phase of fuel economy mandates for model years 2011-2016, the Transportation Department’s own analysis proved what paltry climate impact the regulations would have, estimating that the mandate would slow warming by seven-thousandths of a degree Celsius and reduce sea level rise by six-hundredths of a centimeter by the end of the century.

Ultimately, consumers, not government bureaucrats, should make decisions about what cars they drive. If consumers value saving money on gasoline, they will simply choose to purchase more fuel-efficient cars, and automakers will meet that demand without a federal mandate. If consumers value other attributes—weight, engine power, safety—Washington shouldn’t force automakers to ignore consumers’ preferences.

The Obama-era standards could have backfired in other ways, too.

They could have resulted in automakers making a bunch of cars that people simply don’t want to buy. Maybe the market will shift to the purchasing of more alternative vehicles. But if it doesn’t, and automakers are making these vehicles to comply with the regulations, there’s going to be a lot of unsold cars sitting in lots.

The market does a far better job of meeting consumers’ needs, and each iteration of more stringent fuel efficiency standards takes America’s automobile market further in the wrong direction.

Pruitt has taken an important step in the right direction by beginning the process to revise egregiously aggressive Obama-era vehicle mandates. Ultimately, Congress should repeal fuel economy standards so that producers can make the cars and trucks consumers want to purchase, not those Washington wishes consumers would purchase. Pruitt is right to pump the brakes on these costly vehicle mandates.