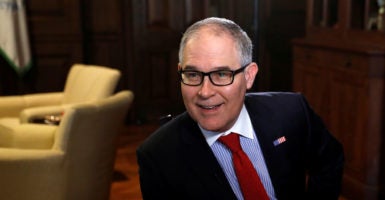 EPA Administrator Scott Pruitt has introduced a new policy requiring all scientific research used as the basis for rule-making to be accessible to the public. (Photo: Kevin Lamarque /Reuters/Newscom)

Should the public be allowed to know how bureaucrats develop policies that have major impacts on our lives? Or should we simply be left in the dark?

That seems like a silly question, right? Hopefully, the answer is obvious.

For some though—including Gina McCarthy, a former Environmental Protection Agency administrator from the Obama administration—transparency seems to be overrated.

Recently, current EPA Administrator Scott Pruitt announced that his agency would no longer allow the use of secret science in developing federal regulations. Specifically, the agency will only use scientific studies to develop regulations when the data and methodology for those studies are made accessible to the public.

This also means the EPA will only fund studies that make this critical information available to the public.

According to McCarthy and her former EPA colleague Janet McCabe, there are a lot of problems. In a recent New York Times op-ed, the two former EPA officials voiced their objections to Pruitt’s attempt to promote open government and public participation in rule-making.

Here are four of their objections, and why they’re wrong.

Claim 1: Pruitt “alone will decide what is and isn’t acceptable science for the agency to use when developing policies that affect your health and the environment.”

Response: Actually, the new EPA policy specifically ensures that everyone, including the public and other scientists, can have input on what is acceptable science. Their real problem is that it does exactly the opposite of what some critics would like, which is to give bureaucrats complete authority over what counts as sound science.

Claim 2: “Peer review ensures that the analytic methodologies underlying studies funded by the agency are sound.”

Response: There’s no way for the public to know whether a specific peer review process has been effective and properly addressed potential problems. Their argument completely ignores the fact that these studies are not being used by the EPA so that academics can discuss abstract and unimportant concepts with each other while pondering their navels. These studies are being used as the basis for public policies that have serious real-world impacts on the lives of Americans.

It’s also important to recognize that even the bureaucrats themselves who may have access to the data and methodology will benefit from hearing different views on the data and methodology, including from other scientists. Public participation in the rule-making process isn’t just there for show, but to actually help inform and shape the decisions made by the agencies.

Claim 3: “Some of those studies, particularly those that determine the effects of exposure to chemicals and pollution on health, rely on medical records that by law are confidential because of patient privacy policies. … The agency also relies on industry data to develop rules on chemical safety that is often kept confidential for business reasons.”

Response: Confidential information can be redacted. If it isn’t possible in some situations, then there are ways to conduct studies to avoid privacy concerns. If those conducting studies would like their work to influence a rule-making, they will adjust accordingly.

Further, the principle of open government and public participation isn’t something that can be thrown away just because some officials want to use studies that they like. These officials and critics may buy into the idea that technocrats should run the administrative state, but most people hopefully still think our country shouldn’t be run by self-proclaimed experts without accountability and oversight.

Response: So what? The big problem is these critics either don’t understand or appreciate our nation’s principles of an open and participatory rule-making system.

The critics appear to think there’s no need for open and accountable government when it comes to science—the public should just leave this work to the experts and trust federal bureaucrats. They also apparently think the bureaucrats are always objective and wouldn’t use questionable science to support their preferred policy outcomes.

Besides this view being laughable—especially given the extreme politics and disregard for the rule of law that persisted in the Obama EPA—it is beyond arrogant. Even the “experts” could use the public’s feedback and the expertise of other researchers and scientists.

McCarthy and McCabe assert that this EPA fight against secret science exists because “the Trump administration has put the profits of regulated industries over the health of the American people.”

They say this even though the EPA’s new push for transparency would work against the administration if that were their grand plan. After all, the EPA won’t be able to use secret science to help any industry now.

Pruitt deserves credit for once again taking the lead to reform a major regulatory process problem at the EPA. Now, other agencies should follow the EPA’s lead and stop using secret science as well.

But most importantly, Congress needs to put an end to the use of secret science for good.