The Key Difference Between Conservatives and Libertarians, and Why It Matters 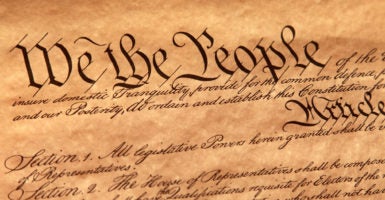 Despite an ongoing political alliance, conservatives and libertarians retain fundamental disagreements over the purpose of politics. (Photo: doublediamondphoto/Getty Images)

Conservatives and libertarians have enjoyed a long and mutually beneficial alliance, leading many to believe they are one and the same.

The differences between them especially blur on college campuses, where hegemonic liberalism requires conservative and libertarian student groups to coalesce in a critical alliance.

While this continued alliance is worth celebrating, it also requires clarification. The difference between the two philosophies can be boiled down as such: Conservatism is a political theory designed to secure the blessings of liberty, while libertarianism is simply and only a market theory. Understanding this distinction is vital if we are to preserve the unique system our Founders intended.

At a recent conference hosted by Young Americans for Liberty, David Azerrad of The Heritage Foundation debated the Cato Institute’s David Boaz over this very distinction.

That phrase—the United Markets of America—rightly captures the heart of libertarianism. While conservatives and libertarians generally agree on economic issues, libertarians tend to commit the error of thinking the market can be applied in all spheres of life with equal success.

In the market paradigm, individuals are concerned with satisfying their own self-interest. This is the right way to think about economics. But there is so much more to consider when we think of a political and social order.

If a political theory is reduced to the pursuit of personal or material self-interest, then, as Azerrad noted, “there’s nothing to preserve, nothing to transmit, nothing that binds us together as a nation.” We are all simply seeking personal fulfillment, and nothing can bind us together as a people.

This is why conservatives advocate policies that “secure the blessing of liberty for ourselves and to our posterity”—a line that Azerrad cited directly from the preamble of the Constitution as the mission statement of conservatism. Liberty is not just something to be enjoyed in the present moment. There must be a comprehensive order, a political and social framework that perpetuates and delivers liberty to succeeding generations.

>>> Is the Conservative-Libertarian Alliance Worth Preserving?

From this, Azerrad drew two conclusions. First, there are two kinds of liberty: ordered and unordered. The two are not the same. What we do with liberty matters. After all, liberty can be used poorly in ways that fail to perpetuate its blessings. This is why conservatives believe citizens need to be able to distinguish between license and virtue. We must be good citizens, not just free citizens.

Second, our founding documents enshrined liberty within a constitutional order so that it would not be squandered recklessly. As custodians and trustees, we have a responsibility to raise and educate the next generation. This is why conservatives believe issues concerning life, marriage, and the family are political in nature, as they help preserve the conditions that make liberty possible.

Despite our ongoing political alliance, it is becoming increasingly difficult for conservatives and libertarians to agree on the purpose of politics. Libertarians offer a reductionist solution that can be appealing in its clarity and in its conformity to liberal cultural norms. Questions over personal character, moral duty, and civic obligations are reduced to the singular doctrine of “live and let live.”

For libertarians, this principle can be applied in almost every circumstance, including in ways that many conservatives find socially destructive or morally consequential. For instance, when it comes to prostitution, abortion, illicit drug use, porous borders, etc., conservatives don’t simply think in market terms. We think about the kind of society that will be conducive to preserving liberty and the good life in the long run.

>>> Read more about David Azerrad and his work.

Libertarians will respond by simply asking: So what? If an exercise of one’s free will does not materially aggress others, then what’s the concern?

The difference here ultimately comes down to what both sides value as the chief political good. Since unrestricted license is the libertarian’s chief good, they see little purpose in extending the debate beyond individual transactions.

Conservatives, however, recognize that while personal freedom is a good, it is not the only good. Without the strong mediating institutions that serve as the building blocks of society—whether it is our families, churches, or community centers—the buffer between the government and the individual erodes. Consequently, government intervention inevitably fills this void, which is ironically the very thing libertarians seek to avoid.

A common libertarian response—which Boaz voiced in the debate—is that conservatives simply do not like change, whatever that change is. Boaz quoted from Friedrich Hayek’s essay, “Why I Am Not a Conservative,” to claim that conservatives are always dragging their heels against change, whereas libertarians “always know the world can be made better” and “don’t look backward, they look forward … to evolution, to social change.”

But the truth is that positive change can only take place within a well-established context, which libertarianism does not account for. Azerrad helpfully filled in some of that context. He noted that in the very same essay, Hayek did not self-identify as a libertarian, but rather as an Old Whig deeply influenced by Edmund Burke, a key figure in conservative thought.

Hayek believed that government coercion “can probably only be kept to a minimum in a society where conventions and tradition have made the behavior of man to a large extent predictable.”

In other words, conservatism is what makes libertarianism possible because it looks to both the past and the present in order to secure the blessings of liberty for the future.