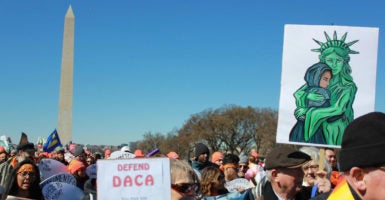 Protesters march in Washington for the continuation of DACA, the Obama administration program protecting certain illegal immigrants from deportation. Brown University says it will continue to harbor DACA recipients even if the program ends. (Photo: Alex Segura/EFE/Newscom)

DACA, an executive action implemented by then-President Barack Obama, authorized renewable two-year deferrals of deportation along with eligibility for work permits for illegal immigrants brought to this country as children.

President Donald Trump sought to phase out the program and asked Congress to decide by law what to do about the roughly 800,000 DACA recipients and others like them.

“Should DACA be eliminated, we will create in-school and postgraduate opportunities for students unable to work legally to engage in stipend-supported research and education that is not citizenship-dependent,” Richard Locke, Brown University’s provost, said in a statement published on Today@Brown.

“Admitted students would receive a stipend and health insurance,” he said.

Brown also offers to cover the $495 DACA renewal fee, “if renewal is an option,” as well as legal services for DACA recipients.

“I do think it’s problematic that the program is being offered exclusively to DACA students and not available to actual U.S. citizens, who may also be in need of support during a fifth year,” Brown freshman Jake Ruggiero said in a phone interview with The Daily Signal.

“I don’t see a problem with helping DACA students,” he said. “But this should occur in tandem with helping other Brown students who are in need and are already citizens.”

Hans von Spakovsky, a senior legal fellow at The Heritage Foundation, said Brown’s program is both a legal and moral issue.

“Brown University is trying to obstruct and nullify federal law, which puts it in the same boat as segregationists in the old South,” von Spakovsky told The Daily Signal. “It is immoral to discriminate against American citizens in favor of aliens who are here illegally and have shown their contempt for the rule of law.”

Along with creating on-campus resources for DACA recipients, Brown’s president, Christina Paxson, wrote a letter to Trump urging the administration and Congress to preserve DACA.

According to the letter, staff said ending DACA would violate Brown University’s core values of service to the campus community and of providing opportunity in a  fair, courteous, responsive, and efficient way.

University staff also made clear in a statement that Brown does not share information with law enforcement regarding the immigration status of undocumented students, and would not do so unless presented with a subpoena.

Brown is not the only school to implement such programs. Willamette University in Oregon and the University of California at Berkeley both offer resource pages for DACA recipients.

According to the Naples (Florida) Daily News, the University of Miami will expand its financial aid program for immigrant students with DACA status to all high schools and transfer applicants from Florida beginning next fall.