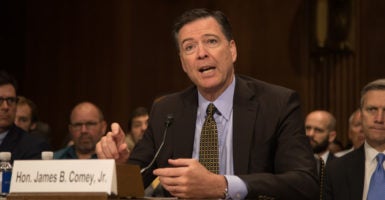 Then-FBI Director James Comey testifies before the Senate Judiciary Committee on May 3, 2017. Comey's testimony could be one of several areas under investigation if Attorney General Jeff Sessions names a new special counsel. (Photo: Jeff Malet Photography/Newscom)

Lying to Congress, misleading a special surveillance court, and failing to disclose conflicts of interest are among possible wrongdoing that a second special counsel could investigate in connection with allegations of a politicized, partisan Justice Department.

“The question is whether Sessions thinks crimes may have been committed,” J. Christian Adams, president of the Public Interest Legal Foundation and a former Justice Department lawyer, told The Daily Signal.

The Justice Department’s Office of Inspector General already was probing possible bias by Justice Department and FBI investigators during investigations of Trump and Hillary Rodham Clinton, who would become his vanquished rival, in the lead-up to the 2016 election.

Inspector General Michael Horowitz  announced Wednesday that he has opened a review of  the methods used by FBI and Justice officials to obtain a warrant to surveil a volunteer adviser to the Trump campaign.

The review by the inspector general’s office will include officials’ “compliance with legal requirements, and with applicable DOJ and FBI policies and procedures” in seeking the warrant from the Foreign Intelligence Surveillance Court, according to a statement obtained by Fox News.

The inspector general also will look into “information that was known to the DOJ and the FBI” at the time “from or about an alleged FBI confidential source.”

That source apparently is Christopher Steele, a former British intelligence agent and FBI informant who put together a “dossier” of embarrassing information about Trump before the election.

The FBI and Justice Department used that document to obtain a warrant to spy on the Trump campaign adviser, according to information released by the House intelligence committee.

Last month, Rep. Mark Meadows, R-N.C., chairman of the House Freedom Caucus, told The Daily Signal that there is evidence of conflict of interest and bias.

“Right now, there has been such a conflict of interest and perhaps some bias that we’ve seen in text messages and some of the email traffic that a special counsel is the only way to have a third-party, independent review of what’s going on,” Meadows said.

Much of the investigation came under scrutiny for possible political bias after anti-Trump texts and email messages between FBI employees Peter Strzok and Lisa Page emerged. The messages referenced a conversation with then-FBI Deputy Director Andrew McCabe and talked about the need for “insurance” in case Trump won the election.

Meadows said at the time that the inspector general’s review would not be sufficient.

“There is already their own internal review with the inspector general, but at this point, you need an independent third party,” Meadows said, adding:

An inspector general is part of the Department of Justice and FBI. They, quote, ‘have a wall between them and the department,’ but they actually work for the department. The other part of that is they can’t bring a prosecution. A special counsel actually could prosecute if there is wrongdoing.

On the recommendation of the FBI’s Office of Professional Responsibility, Sessions fired McCabe two days before his scheduled retirement. The yet-to-be-released inspector general’s findings reportedly say McCabe leaked information about the investigation and then lied about it to the FBI.

“The simple behavior of Andrew McCabe shows how corrupted the investigation into Trump has become,” Adams said. “This raises the need for a new special counsel, but it needs to be someone nonpartisan, outside of Washington, D.C., and the Democratic cluster with the Justice Department.”

The questions emerged as a result of a statement by McCabe, who said Comey was aware he shared information with the media about the Trump investigation. Comey previously had testified under oath to Congress that he didn’t authorize leaking.

House Judiciary Chairman Bob Goodlatte, R-Va., said his committee would subpoena information from the FBI to determine whether Comey was truthful.

Congressional committees and the inspector general have their limits, Adams said.

“The only way to get to the bottom of this is to haul people before a grand jury, and it needs to be a grand jury outside of D.C., that won’t look like a Bernie Sanders convention,” Adams said, referring to the partisan liberal Democratic bent of residents of the District of Columbia.

Their letter asked that a new special counsel work with the inspector general to look into whether the FBI misrepresented the facts regarding the “salacious” anti-Trump document prepared by Steele, the former British spy, that was financed by the  Democratic Party and the Clinton campaign.

FBI and Justice officials presented that document to the Foreign Intelligence Surveillance Court to make the case for a warrant to spy on former Trump campaign aide Carter Page because of alleged ties with Russia.

The senators also asked for a second special counsel to explore “improprieties in the FBI’s relationship with Christopher Steele [and] the potential conflicts of interest posed by the involvement of high-ranking DOJ official Bruce Ohr,” who is married to an employee of Fusion GPS, the opposition-research firm that employed Steele.

Grassley and the other three Republican senators noted that “there was an apparent unauthorized disclosure of classified information to the press.”

In the House, Majority Leader Kevin McCarthy, R-Calif., and Majority Whip Steve Scalise, R-La., have both asked for a special counsel.

Their request followed a March 6 letter from Goodlatte and House Oversight and Government Reform Chairman Trey Gowdy, R-S.C., asking for a probe of possible bias, whether the law was followed in pursuit of a FISA warrant, and how apparent conflicts of interest influenced decision-making in the investigation.

This report has been updated to include news of the inspector general’s expanded review.