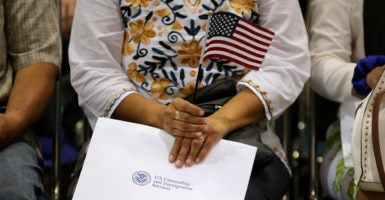 California immediately threatened to sue the Trump administration for returning a question on citizenship to the U.S. census. (Photo: Mike Blake/ Reuters/Newscom)

A question on citizenship will be reinstated to the census in 2020, the Commerce Department announced.

“The citizenship question will be the same as the one that is asked on the yearly American Community Survey, ACS,” the Commerce Department said Monday in a press release. “Citizenship questions have also been included on prior decennial censuses.”

From 1820 to 1950, nearly each census recurring every 10 years included some type of a question on citizenship, according to the Commerce Department.

On Dec. 12, the Justice Department asked the Census Bureau to bring back a citizenship question “to provide census block level citizenship voting age population (CVAP) data that is not currently available from government surveys,” officials said in the release.

In a written statement Tuesday, Pelosi said it would “inject fear and distrust into vulnerable communities, and cause traditionally undercounted communities to be even further underrepresented, financially excluded, and left behind.”

The New York Times reported at least 12 states said they would sue the Trump administration over the citizenship question.

But Mike Gonzalez, a senior research fellow at The Heritage Foundation, told The Daily Signal that he does not believe the case will go anywhere.

“The suit brought by California’s hyperpolitical Attorney General Xavier Becerra on Monday night, claiming that the question violates the U.S. Constitution, is without merit,” Gonzalez said. “The administration should demand expedited review of the suit by the Supreme Court.”

Conservative leaders are praising the announcement.

“I applaud the Trump administration’s decision to include the citizenship question in the 2020 census,” J. Christian Adams, president of the Public Interest Legal Foundation and a former Justice Department lawyer, said in a public statement, adding:

It’s critical that the next redistricting cycle account for the citizen residents of districts so urban centers do not unfairly profit from the political subsidy that higher noncitizen populations provide. This carries the nation one step closer to preventing against actual foreign influences in our elections.