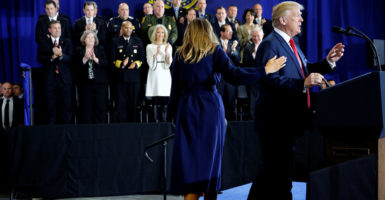 Two conservative lawmakers say they understand President Donald Trump’s push during the opioid epidemic to pursue the death penalty for drug dealers in some instances.

Rep. Louie Gohmert, R-Texas, and Rep. Matt Gaetz, R-Fla., addressed the proposal Wednesday during Conversations with Conservatives, a monthly meeting with reporters hosted on Capitol Hill by conservative lawmakers and The Heritage Foundation.

As a former Texas state judge, Gohmert said, he witnessed firsthand the devastating effects of opioids.

“I’ve sentenced plenty of drug dealers, and they certainly leave a trail of death and destruction in their wake as they deal drugs. So I’m not entirely opposed to that,” the Texas Republican said of the death penalty for certain dealers. “But I don’t know if the country has yet the appetite to handle that kind of a death penalty in cases like that.”

In an appearance Monday in New Hampshire, Trump outlined his administration’s plan to combat the opioid drug crisis. He advocated pursuing the death penalty for drug dealers, a controversial proposition.

The White House also prioritizes preventing addiction, addressing the overprescribing problem, and building a campaign reminiscent of the “Just Say No” anti-drug campaign popularized in the 1980s under President Ronald Reagan.

Trump emphasized the need for tough policies, specifically for the drug dealers he called “big pushers.”

“That toughness includes the death penalty,” the president told the crowd in Manchester, adding:

Some of these drug dealers will kill thousands of people during their lifetime—thousands of people—and destroy many more lives than that. If you kill one person, you [should] get the death penalty, or you go to jail for life.

Attorney General Jeff Sessions followed up on Trump’s  remarks with a memo Wednesday to U.S. attorneys in which he urged them to seek the death penalty in drug cases when “appropriate.”

“I think there are cases where it’s totally appropriate,” Gohmert said, “so I don’t have a problem with the attorney general urging that. It does bring a new attitude of seriousness to drug dealing that just absolutely was not present in the last administration. So maybe it’ll help bring things back in focus.”

Gaetz sought to clarify the target of the president’s proposal.

“The federal capital punishment regime for narcotics is not your street-level drug dealer, it’s not your marijuana dispensary operating under the color of state law,” Gaetz said.

“You’re talking about major drug kingpins,” he said. “I think these statutes were drafted contemplating elements like the Sinaloa cartel, not people who are caught in various [other] elements of the drug trade.”

First lady Melania Trump accompanied the president on his trip to New Hampshire. Although her primary initiative is cyberbullying, she has been present for multiple events on the opioid crisis.

The first lady also made remarks March 1 at the beginning of the White House Opioids Summit.

“Our unified goal is that of helping all who have been affected by drug addiction,” she said.

In an interview with The Daily Signal at the Conservative Political Action Conference in February, Bolling spoke about the loss of his son, Eric Chase, to opioids. That personal loss inspired him to take an active approach to combating the epidemic, he said.