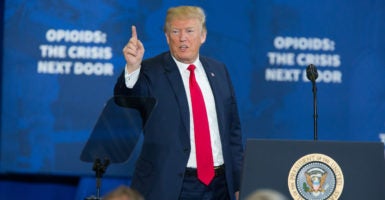 When campaigning in 2016, President Donald Trump often noted how America was trailing other countries, and vowed to reverse that. On Monday, the president highlighted two specific issues: criminal punishment for drug dealers and the price of prescription medicines.

“Every day, 116 Americans die from an opioid-related overdose,” @POTUS says.

“This scourge of drug addiction in America will stop. It will stop. Every day, 116 Americans die from an opioid-related overdose,” Trump told a crowd in Manchester, New Hampshire. “Failure is not an option. Addiction is not our future. … I want to win this battle. I don’t want to leave at the end of seven years and still have this problem.”

New Hampshire has had the second-highest rate of opioid-involved overdose deaths in the United States since 2014, according to the White House.

Trump also said the White House will have a major announcement next month about slashing the price of prescription drugs.

The Trump plan on combating opioids calls for more evidence-based treatment, greater prevention, reducing the demand for addictive prescriptions, and cracking down on the domestic and international supply in several ways, including with a border wall and increased security.

Trump noted his conversations with other world leaders.

Take a look at some of these other countries where they don’t play games. They don’t have a drug problem. We have court cases that last 10 years. Then they get out at the end. We have to be tough. We have to be smart. We have to change the laws. We are working on that right now.

According to the website DrugAbuse.com, the countries that impose the death penalty for selling drugs are Malaysia, China, Iran, Thailand, Saudi Arabia, Singapore, Cambodia, Indonesia, and the Philippines. Trump has previously mentioned China and Singapore.

Trump again cited other countries when vowing to lower the price of prescription drugs.

“We pay as a country so much more for drugs because of the drug lobby and other reasons and the complexity of distribution, which is another term for saying how do we get more money,” Trump said. “If you compare our drug prices to other countries in the world, in some cases it’s many times higher for the exact same pill or whatever it is in the exact same package made in the exact same plant. We are going to change that.”

Trump said there will be a major White House news conference in about a month to announce details for lowering prices. He invited Health and Human Services Secretary Alex Azar to take the stage. Azar said:

Last year, the FDA approved more generic drugs than it ever has in its history. That brings prices down for patients, for the system, for everybody. You also changed the rules so that our senior citizens pay less out of pocket for their drugs. That’s $3.2 billion that they are paying less out of pocket for their drugs when they go to the pharmacy. We are going to be rolling out, as you mentioned in about a month, a whole sleight of proposals around how we decrease the price of drugs and how we bring discounts that the middle men right now are getting, those will go to our patients, to individuals.