Congress Should Get Past Obamacare, Forget Bailouts, and Embrace Real Health Reform 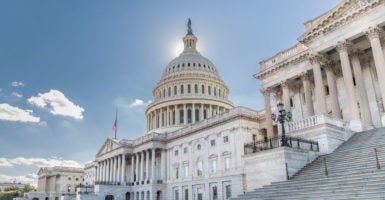 Bailouts for Obamacare insurers would only shore up the regulatory regime that has driven up health care costs. (Photo: idesignimages/Getty Images)

This week, congressional leaders withdrew legislative language that would have bailed out Obamacare’s health insurance companies as part of the $1.3 trillion, 2,232-page omnibus spending bill.

Most American taxpayers are opposed these Obamacare bailouts, but they have every reason to be nervous as long as Congress is in session. The reason: Senate Majority Leader Mitch McConnell, R-Ky., promised Sen. Susan Collins, R-Maine, a vote on her Obamacare “stabilization” proposal.

Meanwhile, Collins and Sen. Lamar Alexander, R-Tenn., recently unveiled the text of their bill to provide new funding for Obamacare’s cost-sharing subsidies, as well as $30.5 billion over three and a half years for taxpayer-funded “reinsurance” payments to Obamacare’s health insurers.

The Heritage Foundation along with other independent analysts have previously debunked claims that this multibillion-dollar bailout of big insurance companies will “save” taxpayers’ money. It will not.

Nor is another congressional spending binge likely to “stabilize” Obamacare’s insurance markets or “reduce” enrollees’ premiums. It will not. It will paper over them.

>>> More Taxpayer Bailouts Will Only Paper Over Obamacare’s Many Failures

For premiums to increase substantially in 2019 and beyond, the undesirable demographic profile of the exchange pools would have to get even worse than it is today, and that is unlikely.

Future cost or savings projections in health care are, of course, always tricky. One fact is, however, indisputable: Obamacare’s many mandates, taxes, fees, and regulations are contributing significantly to artificially high premiums. These regulatory burdens, rather than a misplaced faith in some positive relationship between premium reductions and additional payments to insurers, should be Congress’ focus.

In any case, Congress can consult the historical record. For example, in 2014, reinsurance and risk adjustment payments for insurers amounted to $8.7 billion. In 2015, insurers received $7.8 billion, including a “carry-over” from 2014 payments. In 2016, reinsurance and risk adjustment payments amounted to $3.9 billion. Yet, over the period 2013 through 2017, exchange premiums increased by 105 percent.

In Obamacare’s eighth year, its policy failures are undeniable. The exchanges are failing to evolve into anything resembling a normal market marked by growth in enrollment and robust market competition. Instead, enrollment has plateaued and continues to decline.

In 2016, 11,081,330 enrolled in the exchanges. In 2017, effectual enrollment fell to 10,142,056. For 2018, the initial exchange enrollment is down by an estimated 3.7 percent. Meanwhile, of course, competition among health insurers in the Obamacare exchanges has collapsed: 52 percent of U.S. counties have only one insurer.

Perhaps some congressional leaders are certain that, this time, forcing taxpayers to bail out big insurers will revitalize Obamacare’s broken markets and capture those elusive premium reductions.

There is, however, no such guarantee. Guaranteed additional taxpayer subsidies, regardless of a company’s performance is, unfortunately, Washington’s standard operating procedure for many other government programs.

>>> To Offer Americans an Alternative to ‘Single-Payer’ Health Care, Republicans Must Act This Year

As the White House Council of Economic Advisers observes:

Approximately 85 percent of exchange purchasers receive a premium subsidy. These subsidies are computed so that enrollees do not pay more than a prescribed portion of their income for a common plan, thereby ensuring that insurance companies receive subsidies regardless of how high the premiums go and reducing incentives for price competition as taxpayers fund almost all of the higher premiums.

According to a recent Forbes report, “Cigna, Centene and Anthem have been among the publicly-traded insurers that have forecast improving profits for 2018 in their individual business that includes Obamacare.”

Moreover, the president’s Council of Economic Advisers confirms that assessment: “Gross profit margins (premiums less claims) have increased as the small number of remaining companies gained experience with the individual and small group market risk pool and set higher premiums while government subsidies cover most of the rising insurance costs on the exchanges.”

It is one thing to bail out a failing industry, pleading that another infusion of taxpayer cash will somehow serve the public interest. It’s quite another to top off company profits by picking taxpayers’ pockets. Enough.

American taxpayers, especially the tens of millions of voters who listened to eight years of congressional rhetoric and promises to repeal and replace Obamacare, do not deserve another inexcusable public policy surrender. They do not deserve a repeat of the abysmal 2017 Senate Republican performance, including failure to enact even a watered-down version of a “replacement” bill.

Congress should get serious, forget about Obamacare bailouts, and directly attack the rising health insurance costs that are ravaging millions of Americans in the badly damaged individual and small group markets.

Millions of middle-class taxpayers, particularly individuals and families ineligible for Obamacare’s premium subsidies, desperately need relief from these high insurance costs. Instead of propping up a failing program, Congress should quickly provide that relief.

A broad range of conservative policy analysts have coalesced around better longer-term solutions, thus establishing the groundwork for a comprehensive and competently crafted legislative alternative. Such an approach—reflecting the thoughtful contributions of various senators last fall—would return the lion’s share of regulatory authority over health insurance to the states. Innovative states would become the platforms for expanding patient control over health care dollars and decisions.

If done right, such an approach would not only reduce costs and increase insurance coverage, but also expand the health care choices available to millions of Americans.

House and Senate members should get beyond Obamacare. Ignore the rear view mirror and look ahead to the hard, but rewarding work of health care reform—reform based on real patient choice and genuine free enterprise.