Maryland Bill Seeks to Drive Out Airbnb, Other Hotel Competition 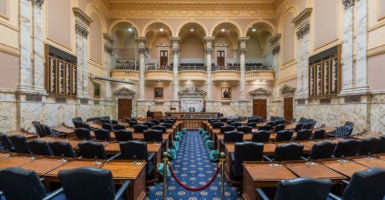 Two bills that target home-sharing platforms are moving through both the Maryland House and Senate. They are heavily backed by the hotel lobby. (Photo: gnagel/Getty Images)

Over the last decade, short-term rental platforms like Airbnb, HomeAway, and VRBO have expanded and provided an economic boom to many communities.

Yet several localities are pursuing onerous zoning rules and other regulations that would restrict short-term rental activity.

For many homeowners, short-term rental provides a critical source of additional income to help them pay their mortgages and to meet other financial obligations. States can protect their residents from overzealous, local bureaucrats with state pre-emption.

Short-term rental helps local communities by growing the number of tourists that visit the area. A recent study published by the National Bureau of Economic Research found that out of all Airbnb reservations, 42 to 63 percent would not have resulted in a hotel stay.

Despite the benefits to communities, short-term rental has come under increased scrutiny from state and local officials as it has expanded in both size and scope. Hotels and other legacy industries that see short-term rental as a threat to their market power have lobbied powerful legislators to impose strict requirements on platforms and their hosts.

One proposal, currently being considered in the Maryland Legislature, would empower localities to impose arbitrary regulations on short-term rentals while requiring platforms like Airbnb and HomeAway/VRBO to enforce them. In the process, the state would impose onerous information collection requirements on hosts and platforms, undermining the privacy of hosts and their guests.

SB 1081 and the companion bill, HB 1604, are currently moving through both the Maryland House and Senate.

The hotel lobby is the primary driver behind this legislative push. Emerging home-sharing platforms like Airbnb pose a threat to the traditional hotel business model.

Home sharing also limits the ability of hotels to price gouge their customers during peak times, as it provides customers alternative lodging options when they are needed most.

According to the study by the National Bureau of Economic Research, without Airbnb, hotels would have gained $412 million in revenue—a 1.5 percent increase for 2014. This bill represents an anti-competitive measure to stifle innovation and entrepreneurship to protect the special interest of hotels.

Maryland lawmakers have enjoyed an especially cozy relationship with one major hotel. Marriott just received $62 million in state and county subsidies to build its new headquarters in Bethesda, Maryland.

This agreement is the second taxpayer-funded incentive package the hotel giant has received from Maryland and Montgomery County in less than two decades. Marriott is also behind the push to introduce new rules to squash its short-term rental competition.

The bill before the Maryland Legislature would enlist platforms to enforce local zoning rules and other regulatory violations. Airbnb and similar platforms would be required to remove hosts who had come under fire with their local government for any possible violation, or risk monetary fines. Overzealous local bureaucrats would have a field day.

Moreover, the proposal would require the collection and retention of personal information of hosts and guests and empower state employees to demand that information on a whim.

Chicago put in place similar regulations that required home sharers to collect addresses and other personal information of guests. The Goldwater Institute sued the city over these and other rules.

Los Angeles also proposed fining home-sharing platforms if hosts violated local zoning ordinances and platforms failed to remove the hosts. This misplaces the responsibility of who is required to follow local ordinances. The online platforms are an advertising vehicle, not owners or managers of the properties listed on their sites.

State governments can protect their citizens’ property rights, economic opportunity, and privacy rights by pre-empting localities from passing excessive land use and zoning regulations that result in a regulatory violation of individual property rights.

In 2015, Arizona pre-empted localities from imposing harmful regulations by passing legislation that required all short-term rental regulations to be directly related to health and safety. This effectively prohibited arbitrary regulations relating to occupancy, use, and classification.

The Arizona legislation was largely drawn from the Goldwater Institute’s Property Ownership Fairness Act. The model legislation included a compensation requirement if local governments wished to impose regulations that were not directly related to public health and safety. This effectively protects a property owner’s right to short-term rent their property and use it in many other ways.

Arizona’s policy also includes a provision that allows home-sharing platforms to collect and remit taxes to the state on behalf of their platform hosts. This helps state revenue collection while ensuring that the hosts will not be double-taxed.

The tax collection process should be as straight forward as possible, so hosts can easily pay the taxes they owe without onerous registration and remittance burdens.

Rather than catering to powerful and entrenched special interests, states should embrace the diverse and flourishing short-term rental market, protect residents’ property and privacy rights, and allow consumers to choose where they’d prefer to stay during their visit. Such an approach will most benefit their residents and businesses.