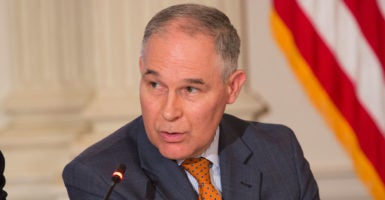 “We need to make sure [the EPA's] data and methodology are published as part of the record,” Environmental Protection Agency Administrator Scott Pruitt says. (Photo: Chris Kleponis-CNP/MEGA/Newscom)

“We need to make sure their data and methodology are published as part of the record,” Pruitt said. “Otherwise, it’s not transparent. It’s not objectively measured, and that’s important.”

Pruitt will reverse long-standing EPA policy allowing regulators to rely on nonpublic scientific data in crafting rules. Such studies have been used to justify tens of billions of dollars worth of regulations.

EPA regulators would only be allowed to consider scientific studies that make their data available for public scrutiny under Pruitt’s new policy. Also, EPA-funded studies would need to make all their data public.

“When we do contract that science out, sometimes the findings are published; we make that part of our rule-making processes, but then we don’t publish the methodology and data that went into those findings because the third party who did the study won’t give it to us,” Pruitt added.

Conservatives have long criticized the EPA for relying on scientific studies that published their findings but not the underlying data. However, Democrats and environmental activists have challenged past attempts to bring transparency to studies used in rule-making.

Rep. Lamar Smith, R-Texas, pushed legislation to end the use of what he calls “secret science” at the EPA. Pruitt instituted another policy in 2017 backed by Smith against EPA-funded scientists serving on agency advisory boards.

“If we use a third party to engage in scientific review or inquiry, and that’s the basis of rule-making, you and every American citizen across the country deserve to know what’s the data, what’s the methodology that was used to reach that conclusion that was the underpinning of what—rules that were adopted by this agency,” Pruitt explained.

“The chairman has long worked toward a more open and transparent rule-making process at EPA, and he looks forward to any announcement from Administrator Pruitt that would achieve that goal,” committee spokeswoman Thea McDonald said.

Junk science crusader Steve Milloy also called on the EPA to end its use of “secret science” in rule-making, especially when it comes to studies on the toxicity of fine particulates in the air.

The EPA has primarily relied on two 1990s studies linking fine particulate pollution to premature death. Neither of the studies have made their data public, but the EPA used their findings to justify sweeping air quality regulations.

Reported benefits from the EPA rules are “mostly attributable to the reduction in public exposure to fine particulate matter,” according to the White House Office of Management and Budget report. That’s equivalent to billions of dollars.

In fact, one of the EPA’s most expensive regulations on the books, called MATS, derived most of its estimated benefits from reducing particulates not from reducing mercury, which the rule was ostensibly crafted to address.

Democrats and environmentalists have largely opposed attempts to require the EPA rely on transparent scientific data. Said data would restrict the amount of studies the EPA can use, but a major objection is making data public would reveal confidential patient data, opponents argue.

“A lot of the data that EPA uses to protect public health and ensure that we have clean air and clean water relies on data that cannot be publicly released,” Yogin Kothari, a Union of Concerned Scientists representative, told E&E News.

“It really hamstrings the ability of the EPA to do anything, to fulfill its mission,” Kothari said.

Milloy, however, countered and argued it’s a “red herring” to claim that forcing regulators to use public science data would harm patient privacy.

“The availability of such data sets is nothing new,” said Milloy, publisher of JunkScience.com and senior fellow at the Energy and Environmental Legal Institute.

“The state of California, for example, makes such data available under the moniker ‘Public Use Death Files,’” Milloy said. “We used such data in the form of over 2 million anonymized death certificates in our recent California study on particulates and death.”

“Opponents of data transparency are just trying to hide the data from independent scrutiny,” Milloy added. “But the studies that use this data are taxpayer-financed, and they are used to regulate the public.”