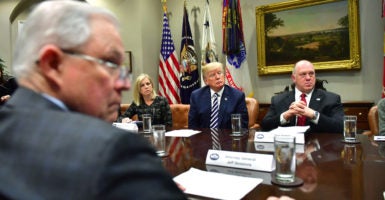 Mary Ann Mendoza was enraged that the illegal immigrant who killed her son—police Sgt. Brandon Mendoza—wasn’t deported for a crime committed in Colorado two decades earlier.

“They are not sanctuary cities, they are outlaw cities,” @SenTomCotton said.

Though she wrote a letter to President Barack Obama after her son’s death in 2014 expressing her concern, she found a more receptive voice Monday when participating in a roundtable discussion at the White House with President Donald Trump.

“This is actually a mass murder happening in the United States by illegal aliens killing American citizens,” Mendoza, who lives in Arizona, said Monday in a meeting that included Cabinet officials, members of Congress, and state and local law enforcement officials.

“Over 63,000 Americans have been killed since 9/11 by illegal aliens,” Mendoza continued. “It’s a crime spree being left unchecked and these sanctuary state and city officials are putting American lives in harm every single day. We have become collateral damage to their personal agenda.”

Trump called out California, the first and only state to become a sanctuary state, making it illegal for local law enforcement to report illegal immigrants.

“California put innocent Americans at the mercy of hardened criminals, hardened murderers in many cases,” Trump said Tuesday during the roundtable discussion.

The president noted that Democrats in Congress have opposed legislation to withhold federal funds from sanctuary cities.

“Democrats’ priority is to protect criminals, not to do what’s right for our country,” Trump said. “My priority and the priority of my administration is to serve, protect, and defend the citizens of the United States.”

Sanctuary jurisdictions reject “detainer” requests from U.S. Immigration and Customs Enforcement by refusing to share information relating to potentially removable aliens. “Detainers” are used to request that a state or local law enforcement agency hold a criminal alien in local custody for up to 48 hours to allow ICE to take custody and initiate removal proceedings.

A bill to cut federal funds to sanctuary cities, sponsored by Sen. Pat Toomey, R-Pa., can’t overcome the 60-vote threshold in the Senate to pass. Toomey called this “frustrating.”

The Justice Department filed a legal action regarding three California laws that intentionally obstruct the enforcement of federal immigration law.

“Federal law is supreme law of the land,” Attorney General Jeff Sessions said during the White House roundtable event. “It was made clear by the Supreme Court the federal government has immigration responsibilities.”

The American Civil Liberties Union, a liberal legal group, has opposed any crackdown on sanctuary cities. In a February statement, the group said:

During the White House roundtable, Sen. Tom Cotton, R-Ark., said the jurisdictions defying federal law “are not sanctuary cities, they are outlaw cities.” He added, “it’s past time for Congress to give the administration the tools it needs.”

During fiscal year 2017, which began in October 2016, Immigration and Customs Enforcement made more than 140,000 administrative arrests and affected more than 225,000 removals, according to the White House. During that time, 110,000 of those arrests came under Trump’s time in office. That’s compared to 77,806 arrested for fiscal year 2016.

Of those arrests, 81 percent were of convicted criminals, said ICE acting Director Thomas Homan, who pushed back against the notion that his agency was making indiscriminate arrests. He said there have been “no raids and no sweeps” and that arrests are targeted.

“We are told on one hand to focus our efforts on criminals. … but those same folks who want us to focus on criminals say don’t come into their county jail. It defies logic,” Homan said during the round table talk.

He added that criminals are aware of sanctuary cities.

Homeland Security Secretary Kirstjen Nielsen said she is “horrified” that local elected officials were “pitting” local law enforcement officers and federal immigration agents “against each other.”