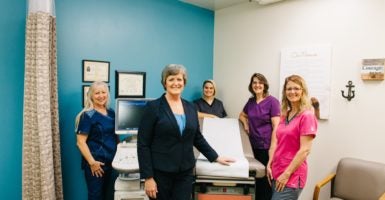 The operator of a pregnancy resource center in California says she may have to close its doors unless the Supreme Court, after hearing arguments Tuesday, rules that a state law forcing the pro-life organization to promote abortion is unconstitutional.

“Each of us as individuals has to make a decision about whether we’re comfortable working in a center [where the law] is forcing us, well, compelling us, to speak a message that is contrary to our personal … deeply held beliefs,” Christine Vatuone, CEO and president of Informed Choices, told The Daily Signal in an interview.

Referring to the 2015 state law that she and other opponents say violates their First Amendment right to free speech, Vatuone added:

Vatuone’s facility, Informed Choices, is a pregnancy resource center and medical clinic in Gilroy, California, although some pro-life pregnancy centers do not offer medical services.

The law passed by the California state Legislature requires “licensed medical centers that offer free, pro-life help to pregnant women to post a disclosure saying that California provides free or low-cost abortion and contraception services,” according to Alliance Defending Freedom, the faith-based legal aid group that represents the pro-life centers in the Supreme Court case.

The posted “disclosure” required by the law must include a phone number where pregnant women may reach Planned Parenthood or other abortion providers.

The California law also requires unlicensed pregnancy centers, which offer adoption referrals and nonmedical resources other than abortions to expectant mothers, to include “large disclosures about their nonmedical status” in any advertising.

This makes advertising prohibitively expensive for pregnancy centers that operate based on donations, Denise Harle, legal counsel with Alliance Defending Freedom, told The Daily Signal in an email.

Billboards or ads in newspapers, other publications, or online “would be astronomically expensive,” she said, since the law requires “all these disclaimers in multiple languages and in larger font.”

Courts have weakened or rejected local laws in states such as Maryland, New Jersey, and Texas, Harle said Friday at an event at the Newseum in Washington, D.C., and “there are none left standing that are even remotely similar to what California has done here.”

Vatuone, who has led Informed Choices since 2014, said the outcome of the case is especially important to her because she also is battling stage 4 breast cancer:

I choose very carefully what I give my energies toward, because the treatments I am on are difficult and I experience a lot of fatigue and difficult side effects. And so the fact that I am giving my time and energy to my center, but also to this case to speak about what we do so the community can better understand—I wouldn’t be doing it if it wasn’t really, really important to me.

The law is an assault on free speech, Harle, the Alliance Defending Freedom lawyer, said.

“California’s goal is to prevent these [pregnancy] centers from their outreach to women, from even forming that relationship so they can give their message of hope and truth to women,” she said. “And [state officials] want to do that by blocking their ability to even tell women where they are located, their address.”

Pregnancy centers in California “can’t even put their address in the advertisement without this very misleading disclaimer that suggests they should be licensed,” Harle said, “and the truth is California doesn’t require a license for any of the activities that the nonmedical centers are doing.”

Vatuone said her clinic in Northern California’s Santa Clara County displays promises on its walls that “we will treat you with respect, we will protect your privacy, we will not pressure you, we will support you, and we will not lie to you.” It would be robbed of its purpose if the Supreme Court upholds the California law, she said.

“If what they were seeing on that wall instead was an advertisement essentially for the abortion industry, it would come up pretty clear to them what we stand for, and it would be false,” Vatuone said.

“That isn’t what we stand for. We exist to help women with the possibilities of life, and that means for herself and for her children. We are very concerned about the hearts of both.”