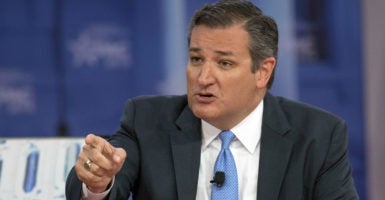 "Almost inevitably, regulators and tax collectors see people prospering on the internet, and they want to tax it, regulate it, and otherwise stifle its growth," says Sen. Ted Cruz, R-Texas. (Photo: Ron Sachs/dpa/picture-alliance/Newscom)

An internet sales tax would cost consumers billions of dollars, kill American jobs by forcing online retailers out of the country, and be a boon to China’s internet retail giant, opponents say.

“The internet is the great equalizer,” Sen. Ted Cruz, R-Texas, said Tuesday. “The internet has democratized small business. Unfortunately, wherever freedom flourishes, Washington gets nervous. And almost inevitably, regulators and tax collectors see people prospering on the internet, and they want to tax it, regulate it, and otherwise stifle its growth.”

“That would be a serious, serious mistake,” Cruz said. “One of the critical reasons the internet has flourished and driven the economy worldwide is that it has been free of taxes and free of unnecessary government regulations.”

In a press conference Tuesday, Cruz was joined by Sens. Steve Daines, R-Mont., and Ron Wyden, D-Ore., and the leaders of several conservative-leaning nonprofits, in speaking out against a proposal to authorize states to add a sales tax to online purchases.

The debate over whether or not to add an online sales tax commenced five years ago, but the proposal failed. The debate is resuming now, thanks in part to President Donald Trump’s support for the tax and a bill sponsored by Rep. Kristi Noem, R-S.D.

Trump wrote in a tweet in August that online retailers such as Amazon.com are hurting the economy and costing jobs, and Noem’s bill, the Remote Transactions Parity Act, could be added to an omnibus spending bill that Congress must pass by March 23.

Amazon is doing great damage to tax paying retailers. Towns, cities and states throughout the U.S. are being hurt – many jobs being lost!

The Remote Transactions Parity Act would allow states to require out-of-state online retailers to collect sales taxes for them on purchases made by their residents.

Andrew Moylan, executive vice president of the National Taxpayers Union, a conservative taxpayer-advocacy organization, said that giving states the ability to tax beyond their borders would give them “unprecedented power” and would be “profoundly damaging” to consumers and businesses.

Jason Pye, vice president of legislative affairs for FreedomWorks, a conservative-libertarian advocacy group, said the internet sales tax would hurt small businesses and is “cronyism at its worst.”

If small businesses don’t close up shop, they’re likely to move to Canada or Mexico, according to Phil Bond, executive director of We R Here, a coalition of small online retail businesses.

“And in an age when Alibaba, the Chinese mega-online retailer, [is] growing so rapidly, they would be exempt from this [tax] as well,” Bond said.

Dan Holler, vice president of Heritage Action for America—a conservative advocacy organization—estimated the measure would cost consumers between $40 billion to $115 billion over the next 10 years.

Holler also noted the “generational divide” on the issue between older and younger generations. The last time the Senate took up this issue, in 2015, he said, 12 out of the 13 Republican senators under the age of 55 voted against the internet sales tax.

“This is a generational issue,” Holler said, noting that 75 percent of 18- to 29-year-old Americans described the internet sales tax as “bad policy.”

Daines is leading the charge to keep the internet sales tax out of the omnibus spending bill.

“The omnibus bill is going to be about spending. I guess it’s ironic that they’d attach another piece of legislation that would talk raising taxes,” he said. “Congress just lowered taxes. President Trump just signed a bill to lower taxes. I think it would be egregious if Congress moved forward here and attached a tax increase to this omnibus spending bill.”

An Internet sales tax is a tax on the American people and small businesses. I urge my colleagues to say no to more taxes, less growth and less jobs. pic.twitter.com/7x3ELjHhTo