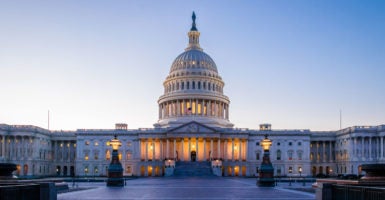 It looks as if the Economic Growth, Regulatory Relief, and Consumer Protection Act is heading toward a vote in the Senate, making it clear that Congress no longer views the Dodd-Frank Act as sacred text.

But although this development is welcome, it is a stretch to say the bill undoes, or even amends, much of Dodd-Frank.

For the most part, the bill provides targeted exemptions from a few regulations for smaller banks. This issue brief and backgrounder provide more details on the bill, but here are the main regulatory changes:

Aside from whether these enhanced standards actually lessen the probability of a large financial firm’s failure, a closer look at the Senate bill shows the new threshold would change little compared to current law.

Furthermore, the bill would authorize the Fed to “tailor or differentiate among companies on an individual basis or by category, taking into consideration their capital structure, riskiness, complexity, financial activities (including financial activities of their subsidiaries), size, and any other risk-related factors that the Board of Governors deems appropriate.”

These details show that what the bill actually does is raise the threshold from $50 billion to $100 billion, while still allowing the Fed to apply special standards to banks with assets less than $100 billion.

It is simply misleading to say the bill raises the threshold from $50 billion to $250 billion.

There’s even more gray area on the actual relief for banks that fit anywhere in this asset size range because the Dodd-Frank prudential standards are based on Basel III capital rules, and these banks will not be exempt from the Basel III framework. For instance, the Fed’s final rule states that:

Enhanced prudential standards include risk-based and leverage capital requirements, liquidity standards, requirements for overall risk management (including establishing a risk committee), stress-test requirements, and a 15-to-1 debt-to-equity limit for companies that the Financial Stability Oversight Council has determined pose a grave threat to financial stability.

So it is rather puzzling that the Congressional Budget Office claims enacting the bill will increase the probability that a large financial institution will fail.

In fairness, the Congressional Budget Office claims that the probability of such a failure would only be “slightly greater” under the new legislation, and it is difficult to know exactly what this phrase means.

Either way, the Congressional Budget Office report does not provide a detailed comparison of the new regulations to current law regulations, much less an analysis of which regulations in the new framework would actually increase the probability of a firm’s failure.

Given how little the bill would actually change things for the large financial firms, it is somewhat surprising that the Congressional Budget Office published this conclusion, no matter how slight the increase in probability.

It is quite clear that the Senate bill does not undo Dodd-Frank and that its main accomplishment is providing regulatory exemptions and exceptions for smaller banks. For those banks that receive regulatory relief, the bill is surely better than nothing, but it is far from a comprehensive reform package.