Progressive Activists Look to Courts to Undermine the Electoral College 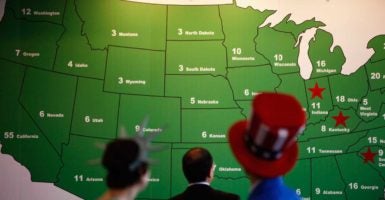 Activists are turning to the courts to upend America's Electoral College process. A lawsuit filed in four states claims the winner-take-all system most states use is unconstitutional. (Photo:Kim Hong-Ji/Reuters/Newscom)

Having failed to generate enough support to abolish the Electoral College through a constitutional amendment, the institution’s detractors are now looking to the courts to upend it.

A new lawsuit, spearheaded by Harvard University law professor Lawrence Lessig and filed in four states, charges that the “winner-take-all” element of how states divvy up their Electoral College votes is unconstitutional.

The District of Columbia and 48 states use this winner-take-all system.

The only exceptions are Maine and Nebraska, which use a proportional allocation of votes.

“Under the winner-take-all system, U.S. citizens have been denied their constitutional right to an equal vote in presidential elections,” said David Boies, an attorney who represented former Vice President Al Gore in the contested 2000 election and is leading the current litigation against the Electoral College. “This is a clear violation of the principle of one person, one vote.”

A number of similar lawsuits have been filed in the past, but all have failed.

According to Ballot Access News, the biggest impediment to overturning the winner-take-all system is Article II, Section 1 of the Constitution, which says, “Each state shall appoint, in such Manner as the Legislature thereof may direct, a Number of Electors, equal to the whole Number of Senators and Representatives to which the State may be entitled in the Congress.”

This gives states a great deal of leeway in how they choose their Electoral College process.

It is unfortunate to see yet another attempt to end a presidential election system that has been a model of stability and success for hundreds of years.

In the wake of the 2016 presidential election, in which President Donald Trump defeated Hillary Clinton in the Electoral College while losing the national popular vote, there were widespread calls to upend America’s 2-century-old electoral system.

Former Attorney General Eric Holder said “we have to just abolish the Electoral College” in an interview with “Real Time” host Bill Maher.

Supreme Court Justice Ruth Bader Ginsburg also took aim at the Electoral College, telling a group of students in an interview that it is the one thing she’d change about the Constitution while admitting that it would be hard to do.

National Popular Vote, an organization dedicated to moving America away from the current Electoral College process, has worked toward eliminating the Electoral College through an amendment to the Constitution or a state compact.

But these calls for what would be a radical change are misguided.

The Founders designed the Electoral College to give Americans a stable presidential succession process as well as preserve the principle of federalism.

It ensures that the diverse perspectives of people in states across the nation, not just those living in the most populous ones like California and Texas, have a voice in determining who will be the president.

Though many Americans see pure democracy as an unqualified blessing, the Founding Fathers had reservations. They created our republican system of government with a certain amount of democratic control, but with checks on pure majoritarianism.

As Heritage Foundation legal expert Hans von Spakovsky wrote in a paper on the Electoral College: “In creating the basic architecture of the American government, the Founders struggled to satisfy each state’s demand for greater representation while attempting to balance popular sovereignty against the risk posed to the minority from majoritarian rule.”

Our Electoral College system has become more democratic over time, with all states relying on a popular vote to select electors rather than state legislatures. Yet, we have kept the vital elements of federalism intact.

Despite the constant calls to give the Electoral College the boot, it continues to be a highly successful and useful means of choosing presidents.