Sheriff Scott Israel Is a Lesson in Failed Leadership 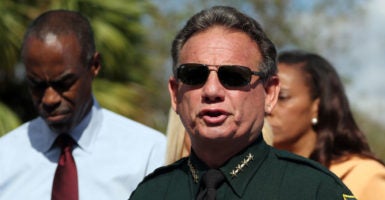 The recent tragedy in Parkland, Florida, has the entire country on edge. In addition to the loss of 17 innocent souls, now America is again divided over how to respond.

That is not the subject here.

In addition to our current debate over how to avoid another tragedy like this—a debate that needs to move beyond mere political posturing—we need to look seriously at how our leaders deal with a crisis. This is a fundamental issue for our country. America seems to have forgotten the essence of leadership.

This concern has been especially raised by the performance—or failure thereof—of the Broward County Sheriff’s Office in the shooting and its aftermath.

First of all, wisdom tells us to allow a full investigation to be held before we condemn the deputy who, in his role of the school resource officer, did not engage the shooter, but stayed outside the school building. Yet before that investigation took place, Sheriff Scott Israel declared that the deputy had failed to do his job.

Perhaps—but the deputy says there were mitigating circumstances, i.e. that he didn’t know where the shots were coming from. The deputy’s failure or exoneration is yet to be seen.

The leadership lesson to be learned is in the behavior of Israel. The law enforcement community is not the same as the military, but the two are as close a set of “cousins” as one can find. Their ethos of service, their ideal of protecting the public, and their determination to leave no one behind all mirrors the military. Police officers have a right to expect their leadership to operate on a similar plane with the military’s ideal of leadership.

Sadly, Israel has been anything but that.

He immediately threw his deputy under the bus. He piled blame on the deputy at the scene (not to mention the National Rifle Association). He also attempted to absolve himself of all responsibility, saying he had provided “amazing leadership” to his department.

Real leaders take responsibility for everything their people do, and fail to do. Israel said he gave the school resource officer a weapon and training, but that he is not responsible for the officer’s lack of heart to take action.

Seriously, sheriff? Training the spirit to protect is not part of a leader’s job? So you have no responsibility for the performance of your people?

That is a cowardly supposition, and an inaccurate one. If your deputy failed to go to the sound of gunfire to save those children, it is on you. If he was too incompetent to recognize the shooter was still firing inside the building, it is on you, sheriff. Leaders take responsibility.

Servant leaders work to empower their people in order to accomplish the mission. Beyond that, they give their troops the credit in success. But most importantly, if they fail, the true leader stands up and says, “It’s on me.”

Someone needs to send Israel back for some remedial leadership training—he has forgotten his basics. Israel, and our nation as a whole, need to return to the ideal of servant leadership.