The Grit of Lincoln and Churchill at War 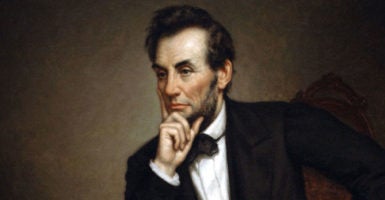 Abraham Lincoln served as an Army captain in the Black Hawk War years before leading the U.S. Army in the Civil War. (Photo: Album / Prisma/Newscom)

Lewis Lehrman is an award-winning writer and lecturer on American history and American economics. He is the author of "Churchill, Roosevelt & Company: Studies in Character and Statecraft," "Lincoln at Peoria: The Turning Point," and many other books.

“All his life he was a man of extraordinary personal courage,” wrote biographer William Manchester of Winston Churchill.

“During raids he would dart out after close hits to see the damage. Sometimes he climbed up to the roof and squatted there on a hot-air vent, counting the Heinkel 11’s as the searchlights picked them up. He wanted to be wherever the bombs were falling.”

The prime minister refused to let German explosives impede his mobility in moving about London. Geoffrey Best wrote that Churchill “had repeatedly risked death with the same insouciance as when he was a young cavalry lieutenant and a middle-aged colonel, and he would have come really close to it on several occasions if strong-minded companions had not restrained him.”

Churchill became annoyed when Allied generals would not let him cross the Rhine River with the troops in March 1945. His loyal aide, Jock Colville, did cross the Rhine as part of Operation PLUNDER. “You succeeded where I failed,” Churchill said. “Tomorrow nothing shall stop me.” Indeed, nothing did.

Sometimes there was in Churchill’s conduct a rash tempting of death, even a staging of his bravado—as when he urinated on Nazi rubble. From early years as a cavalry officer, Churchill believed in his star. It may have been either a virtue or a vanity, but he would often cheat death bravely on the field of battle.

Abraham Lincoln’s courage—developed from boyhood on the frontier—was steadfast, unselfconscious, rarely staged. In a speech on the floor of the House of Representatives in 1848, Congressman Lincoln even mocked his own courage as a “military hero,” a captain during the Black Hawk War with Indians in Northwest Illinois: “I had a good many bloody struggles with the musquetoes [sic]; and, although I never fainted from loss of blood, I can truly say I was often very hungry.”

Captain Lincoln did not feel the need to portray himself as a fearless leader, remarking, “I who am not a specially brave man have had to sustain the sinking courage of these professional fighters in critical times.”

However, Lincoln did not flinch when challenged. As a young man in 1831, he had taken on the bullies in New Salem, an act that made him a local hero.

In Washington, three decades later as president, he brushed off attempts on his life—paying little attention when a bullet knocked off his hat. He would review Union troops in sight of well-equipped enemy snipers.

In May 1862, as commander in situ, he personally directed operations to capture Norfolk, Virginia. Nor did he hesitate in July 1864 to mount the battlements of Fort Stevens to observe the attack going on directly before him.

Force of will, joined to the bravery of both commanders in chief, proved vital to their victories. Churchill and Lincoln made war rather than submit to aggression and insurrection. They led their nations along a perilous road, having repudiated appeasement of dictators and slavemasters.

Upon victory, after the exhausting war efforts in Europe, Churchill spoke to his elated countrymen on May 13, 1945:

I told you hard things at the beginning of these last five years; you did not shrink, and I should be unworthy of your confidence and generosity if I did not still cry: Forward, unflinching, unswerving, indomitable, till the whole task is done and the whole world is safe and clean.

Japan had not yet surrendered.

The prime minister would not accept defeat. Nor could Lincoln accept anything less than victory in war. He would say in his second inaugural address in March 1865: “The progress of our arms, upon which all else chiefly depends, is as well known to the public as to myself.”

Massachusetts Congressman George Boutwell summed up the president’s war leadership and its consequences: “The policy of Mr. Lincoln and those who acted with him secured the reign of justice ultimately in our domestic affairs.”

This adapted excerpt has been republished with permission from Lewis Lehrman’s new book, “Lincoln & Churchill: Statesmen at War” (Stackpole Books, 2018).