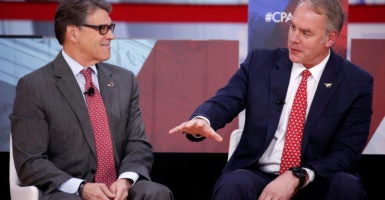 “No one does it better than the U.S.,” Interior Secretary Ryan Zinke, right, says Friday during an appearance with Energy Secretary Rick Perry at the Conservative Political Action Conference. (Photo: Joshua Roberts/Reuters/Newscom)

Perry, the former governor Texas, invoked the memory of  President Jimmy Carter’s infamous “malaise” speech in 1979 to drive home the point that “American ingenuity” in the private sector has transformed the energy sector.

Where Carter anticipated a future where “energy shortages” would impose limits on America’s economic potential, entrepreneurs stepped in with technological innovations such as hydraulic fracturing, or fracking, that unleashed domestic energy supplies, Perry said:

Today, the United States of America is the largest oil- and gas-producing country in the world. This didn’t happen because of government regulations; it happened because the government got out of the way and let the private sector do what it does best.

Perry told the CPAC audience that the energy independence achieved by America in recent years has significant implications internationally as well:

We don’t just export liquefied natural gas, we export freedom around the world. Our allies now know that because of American energy coming to their shores, they are free from other countries that would put them in jeopardy and because of American ingenuity we are free. That’s the extraordinary story of the second decade of the 21st century.

Beauprez asked Zinke to discuss the designations of new wilderness and national monuments imposed by the Obama administration that made it difficult for average citizens to access public lands.

Zinke said he would work to roll back some of those restrictions.

“Public lands belong to the people, not special interests,” Zinke said. “I’m a steward of recreation, hunting and fishing. As Americans, we should enjoy our public lands and not be locked out.”

Zinke said America has struck a balance between regulations and economic activity that holds up well in comparison to other parts of the world.

“No one does it better than the U.S.,” he said. “We have a regulatory framework that ensures accountability. Go to the Middle East and Africa, that’s where the problems are.”