Our Roads and Bridges Are Not Actually Crumbling 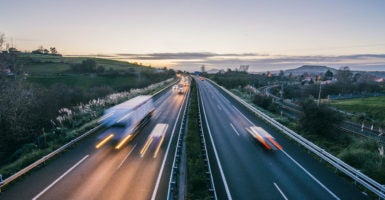 A full 93 percent of roads in the National Highway System are in fair or better condition. (Photo: MarioGuti/Getty Images)

In his State of the Union address, President Donald Trump described the goal of his infrastructure plans: to cover the nation with “gleaming new roads” built with “American grit”—to emulate the great projects of the past, such as the Empire State Building.

This presents a much-needed opportunity for the president to fundamentally retool the outdated way the nation invests in its infrastructure.

But in the rush to formulate a plan to revitalize the nation’s infrastructure, many have invoked the myth that our infrastructure is “crumbling” and is in unprecedented disrepair. This is, quite simply, a mischaracterization.

That’s not to say there’s no room for improvement. Most of us can readily think of a pothole-laden street nearby, or recall a bad experience at a crowded airport. But widespread “crumbling”?

The fact is, the nation’s major infrastructure—the most vital assets that span states and regions—is in satisfactory condition.

Consider federal data on the nation’s bridges. Despite a reputation of steep decline, the number and share of bridges deemed “structurally deficient” (not unsafe, but in need of elevated maintenance) has declined by more than half over the last 25 years and now represents just 9 percent of the nation’s total.

The same goes for the nation’s major roads. A full 93 percent of the miles driven on the National Highway System is on pavement that is in fair or better condition.

The nation’s gateways to the world are also performing well. U.S. airports move more people than ever before and boast a near perfect safety record for scheduled commercial service. The nation’s seaports continue to be among the world’s largest conduits for international trade, providing affordable access to the world markets.

While this reality should cause taxpayers to think twice about the need for a massive federal spending plan, it is not to imply that the nation’s infrastructure is in pristine condition across the board. There are indeed public structures that require repair: local roads to repave, decrepit locks to refurbish, and water systems to replace.

However, this is not the case due to lack of federal funds. It is a symptom of a federal regulatory and funding system that makes it harder to accomplish vital repairs.

First, the cumbersome environmental review and permitting processes place a huge burden on all major infrastructure projects. On average, it takes more than five years just to receive an environmental impact statement, one step of many in the process.

Some projects are stuck in regulatory limbo for decades. These delays amount to billions of dollars in additional costs for governmental and private projects alike without providing any obvious environmental benefits. (Other environmentally conscious countries manage to approve projects much more quickly than does the U.S.).

Trump correctly called these delays a “disgrace.” Streamlining the current labyrinthine system to a maximum of two years should continue to be a priority for an administration that has prided itself on sensible deregulation.

Another area that requires drastic improvement is the top-down funding system that too often inserts the federal government into local infrastructure decisions.

For highways, airports, and inland waterways infrastructure alike, the federal government acts as an intermediary by collecting taxes on users and redistributing them back to the states or project sponsors after stuffing the funds with costly mandates and diverting resources to pet projects.

A far more simple and efficient approach would be to cut out the middleman and allow users to fund projects directly at the project level or through local governments. The result would be a simpler and much more responsive funding regime that could better prioritize resources and modernize America’s infrastructure without special-interest interference from Washington.

Excessive environmental regulations and unnecessary funding schemes are just two ways of many that the federal government impedes infrastructure deployment. But they represent a tremendous opportunity for the Trump administration.

The right way forward is not to have the feds break the bank in vain. It is to take the opportunity to fix what’s wrong with the way the federal government impedes infrastructure investment.