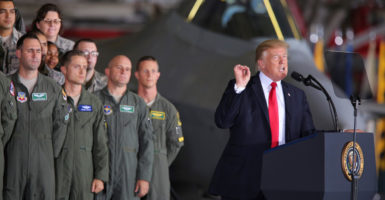 According to reports, President Donald Trump has called on the Pentagon to hold a military parade in Washington, D.C. (Photo: Oliver Contreras/Sipa USA/Newscom)

Sometimes it’s good to have a little historical perspective when reacting to the news of the day.

The Washington Post reported on Tuesday that President Donald Trump was working with the Pentagon to host a military parade in the District of Columbia after he was so impressed by France’s Bastille Day parade, which he witnessed in July.

“It was a tremendous day, and to a large extent because of what I witnessed, we may do something like that on July 4th in Washington down Pennsylvania Avenue,” Trump said last year, according to CNBC. “We’re going to have to try to top it, but we have a lot of planes going over and a lot of military might, and it was really a beautiful thing to see, and representatives from different wars and different uniforms.”

Numerous pundits immediately hit the administration with accusations of behaving like a dictatorial regime.

“We have a Napoleon in the making here,” said Rep. Jackie Speier, D-Calif.

#PresidentLoco wants to lead a big military parade. Who’s going to finally tell him, he has no clothes on? #EmperorsNewClothes

One step closer to the autocracy. All hail #KimJongTrump. https://t.co/SmbQSHRITq

We now have nearly 50 Americans who have signed on to lay in front of the tanks if Trump brings out a Military parade. We are not an empire drifting towards extinction. Will you join us? Here's the call to action video https://t.co/gqxAoGJmAf
#TrumpParade #militaryparade

Regardless of the utility of a military parade, the practice is nothing new in American history. Though it’s been a while since a military parade has been hosted in Washington, D.C., it used to be far more common.

Some of America’s first presidents attended military parades in the nation’s capital for the Fourth of July, including John Adams in 1798 (held in America’s then-capital of Philadelphia) and Thomas Jefferson in 1803 and 1804. Of course, these parades were much smaller than anything that could be expected today.

The largest military parade in American history was in 1865 at the close of the Civil War. To celebrate a Union victory over the Confederacy, President Andrew Johnson and Gen. Ulysses S. Grant presided over the Grand Review of the Armies in Washington, D.C., that included over 200,000 soldiers.

It was an impressive display of perhaps the greatest army ever assembled in the Western Hemisphere. Historian Ronald C. White called it a “never-to-be-forgotten sight” in his biography of Grant.

“Grant stood near the White House in a reviewing stand, which was festooned with star-studded flags inscribed ‘Shiloh,’ Vicksburg,’ and ‘Wilderness,’ watching his men,” White wrote.

Military parades continued to be thrown during and after World War I and World War II. The practice continued throughout the Cold War.

In 1953, a military parade featuring tanks and an atomic cannon was held for President Dwight Eisenhower’s inauguration, a performance repeated in 1957.

Even President John F. Kennedy had a parade at his inauguration in 1961 that featured various military hardware, including nuclear warheads.

The military parades came to a halt during the Vietnam War as anti-military attitudes began to rise.

Unlike the case in previous conflicts, there was no national parade to welcome American soldiers home after fighting in Vietnam. Vietnam vets had to wait until 1982 to have one thrown in their honor, a muted affair due to the still lingering anti-military attitudes in the country.

The last military parade in Washington occurred in 1991 at the close of the first Gulf War in Iraq.

It was hosted as a sign of thanks to troops for a job well done and was seen as an important healing moment for the country and the military.

We meet today to remember the men and women who gave their lives to their nation and to the ideal of freedom during Operation Desert Storm. All across America people celebrate our victory in that war, and there’s a new and wonderful feeling in America.

Though there have been requests to host a large military parade for returning Iraq and Afghanistan war veterans, the Pentagon never put one together.

Questions over the need for a large display of military might and how to deal with the logistical cost of such a venture are certainly up for debate. What isn’t debatable is the fact that demonstrations of this type are nothing new under the sun.

James Carafano, a national security and foreign policy expert at The Heritage Foundation, told The Daily Signal that there are clear differences between a military parade thrown by the U.S. and one thrown by an authoritarian regime.

“Democracies hold parades because they are proud of their armed forces and the role they play in defending freedom,” Carafano said. “Anyone who can’t tell the difference lacks a sense of proportionality and common sense.”

The fact is, military parades are a tradition as old as the republic.