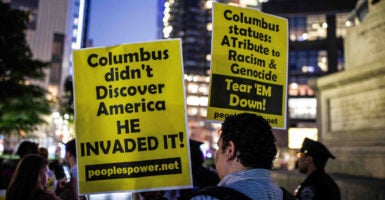 Another day, another historic statue comes down.

This time in California, to no one’s surprise.

On Tuesday, the San Jose City Council voted to remove a Christopher Columbus statue from City Hall. The California city joins a long list of other municipalities that have considered removing Columbus statues or have abolished Columbus Day in favor of Indigenous Peoples’ Day.

So, why did this statue have to come down?

The vote came after activists repeatedly denounced the explorer, whose conquests in the Caribbean led to the deaths of hundreds of thousands of indigenous people, and declared him not statue-worthy.

San Jose Mayor Sam Liccardo backed the move, saying, according to CBS SFBayArea, that “there is no policy basis for keeping a statue of somebody who was not from San Jose in City Hall.”

“Look, I’m Italian-American. I think my grandfather was a member of the group that donated it,” Liccardo said. “But I think that our understanding of history evolves as we learn more.”

No local museum wants the statue, according to the report, so its final location is currently in limbo.

There is a lot to unpack from this absurd decision.

It’s sad that a man who most Americans once recognized as the seed-planter of their civilization has been so unceremoniously cast aside.

There was a time when Columbus was a nearly universally revered figure in the Americas, a man who stood for the bold, entrepreneurial spirit of the New World.

Columbus was a hero for immigrants, a man who risked all to forge a new beginning in a far-off land.

It’s incredible that modern, anti-Columbus activists have adopted the rhetoric of anti-immigrant and white supremacist groups from the 19th and early 20th centuries to denounce the famed adventurer.

As I wrote in October:

… In the 1920s, the [Ku Klux Klan] “attempted to remove Columbus Day as a state holiday in Oregon,” burned a cross “to disturb a Columbus Day celebration in Pennsylvania,” and successfully “opposed the erection of a statue of Columbus in Richmond, Virginia, only to see the decision to reject the statue reversed.”

The Klan and other anti-immigrant organizations hated the growing Italian and Catholic influences in America and tried to portray Columbus as a barbaric and unremarkable figure.

Americans adopted Columbus as one of their own and have celebrated him with statues, street names, city names, and a federal holiday.

Where the Klan failed, modern-day left-wing activists are succeeding in, literally, tearing up Columbus’s legacy.

It’s amazing that San Jose, of all places, wants to sever all connection to Columbus.

The Italian explorer sailed under the Spanish flag and thereby opened the Americas to Spanish migration. In many ways, he is the father of Latin America and all of the places touched by Spanish colonization efforts, even more so than the United States.

San Jose is, of course, a Spanish name, and though Columbus never stepped foot in the city, its existence owes a great deal to his voyages. To say that he has no link to it is like saying George Washington has no direct connection to the state of Washington, so its name should be changed.

While there has been a long-term move by academia to discredit Columbus and paint him in a negative light, especially in regard to how he treated the natives he met in the New World, many of these portrayals have been unfair or simply untrue.

Columbus has certainly had his detractors, even from his own time, but he was not the monster many have tried to portray him as, nor is it fair to judge the actions of a man in the 15th century strictly by the standards of the 21st.

“Columbus strictly told the crew not to do things like maraud, or rape, and instead to treat the native people with respect,” said Stanford professor emeritus Carol Delaney in an interview with Catholic fraternal organization the Knights of Columbus. “There are many examples in his writings where he gave instructions to this effect. Most of the time when injustices occurred, Columbus wasn’t even there. There were terrible diseases that got communicated to the natives, but he can’t be blamed for that.”

The efforts to purge Columbus from every aspect of the public sphere go to the heart of why much of the anti-statue movement has been absurd.

We are now combing through history, searching out historical grievances with little context and even less appreciation for why Americans once paid tribute to these now hated individuals.

The bottom line is that while the city of San Jose has every right to make a decision about who it will or won’t celebrate, it is nevertheless a sad and telling moment in our history when we give license to such ruthless and uncompromising iconoclasm.