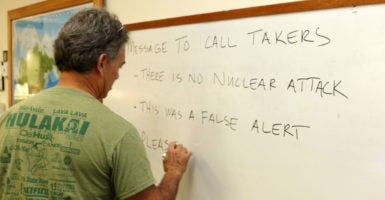 The false alarm of a missile attack on Hawaii and the completely inadequate civil defense response deserve much more than snickers and head shakes. These problems must be fixed.

The fiasco Jan. 13 was indeed caused by a simple human error: A state operations center worker hit the wrong button.

That’s easy to fix. A few adjustments to their check lists and maybe moving the “drill” button a bit further away from the “warning” button will solve it.

But there’s much more to fix. It was clear to anyone who has worked any level of civil defense planning, or who has lived through the drills of the 1950s and ’60s, that after the false alarm went out, no one in Hawaii had any idea what to do.

One news report showed a father putting his child into a sewer manhole. Another reporter interviewed a tourist who was told to “shelter in place in your room,” which happened to be on the 13th floor of his hotel. People were running everywhere—citizens and tourists alike.

No one had developed any plan of action, no plan had been disseminated, and no one had conducted any drills in preparation. All of that should now be done, ASAP. Not to be gloomy, but truth be told, I am not sure if any of these things, even when they get done (and they should get done), will help all that much.

The Hawaiian Islands are not that big, and there are a lot of folks who live and visit there—a few million citizens, plus hundreds of thousands of tourists. We now know that the hide-under-your-desk drills of my youth and the Cold War bomb shelters would not help that much, if at all.

Hawaii is North Korean dictator Kim Jong Un’s most likely target, and Hawaii is not ready.

Kim has made specific threats to Hawaii. He has also threatened the U.S. territory of Guam and the U.S. mainland.

But unlike Hawaii, Guam is not a state and is therefore a less high-profile target. It has a small fraction of Hawaii’s population, and while having some U.S. military stationed there, Hawaii has far more—U.S. Pacific Command. This warfighting headquarters would lead any U.S. action against Kim’s dictatorial regime.

Hitting the U.S. mainland would be a huge home run for Kim, but the technology of delivering a nuclear-tipped ballistic missile here is tougher given the added range, making it a less likely bet. So Hawaii may be Kim’s sweet spot.

A good civil defense plan is great, but on an island, it is not sufficient. If Hawaii cannot really do much to protect its people when a nuke hits, the only real solution is to make darned sure that a missile never gets through.

If Hawaii is the most likely target, it should be recognized as such and given more protection.

Right now, the Navy has several Aegis ships placed near and around Hawaii. The missile defense capabilities of these floating combat systems are formidable, but the percent-chance of a missile slipping past them may still be too high to tolerate, particularly if the number of Aegis-capable ships is down due to other duties.

While it is certainly preferable to shoot down Kim’s missiles in the early boost or midcourse phases—which would be far away from our people—Hawaii’s last chance at protection would be to kill a missile on its way down, during the terminal phase.

There are no options after that. Given this, we should employ the best means possible to maximize the chance of knocking out a missile in the sky. The best, cheapest, and fastest way to do that is already available.

Several years ago, Hawaii was used as a test bed for Aegis Ashore, a missile defense system that America developed for deployment in Eastern Europe, to protect our allies there from Iran’s ballistic missiles.

The entire lash-up was tested and proven in Hawaii. It has since been placed in Europe, and it works. The system can be provided with a radar and turned operational within a matter of weeks.

This is all proven technology, not pie-in-the-sky future theory. The Aegis ships are superb, but they move around and have a number of requirements. A shore-based system would be there all the time.

Whichever missile defense option is chosen for Hawaii, these systems would radically upgrade the defensive capabilities of the island. America owns these systems now, and needs only to move them to Hawaii and put them into operation.