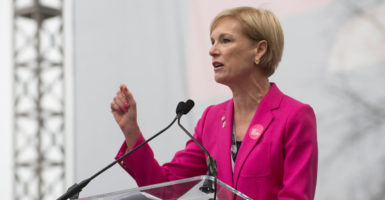 Cecile Richards will leave behind a brutal legacy if she departs from her position as the president of Planned Parenthood.

Richards—who reportedly told the organization’s board Wednesday that she plans to step down—pioneered a company that has aborted 7,132,130 babies since Margaret Sanger’s founding of the abortion organization. Planned Parenthood doctors aborted more than 328,348 unborn babies in 2016, and killed 6,803,782 unborn babies between 1978 and 2016, according to CNS News.

Richards was at the forefront of mobilizing pro-abortion forces and promoting Planned Parenthood’s services, which include contraception, abortion pills, early abortions, and dismemberment abortions, in which clinicians rip the babies apart limb by limb before pulling them out of the uterus.

Former Planned Parenthood manager Ramona Trevino described the organization as “demonic,” and told The Daily Caller News Foundation that it grooms young girls as future abortion patients and promotes a promiscuous lifestyle. “We have monthly quotas to meet. They’re just numbers,” she said.

The organization ran 938 clinics in 1995 when Planned Parenthood was at its peak operational level, according to an American Life League report, all of which were responsible for killing thousands of unborn babies.

The investigation came after the Center for Medical Progress published a series of explosive videos in 2015 revealing that the abortion giant was harvesting and distributing aborted baby parts for research. Senate Judiciary Chairman Chuck Grassley referred Planned Parenthood to the FBI at the conclusion of that investigation, saying his committee found evidence indicating the group was profiting.