Podcast: The Difference Between the Women’s March and the March for Life 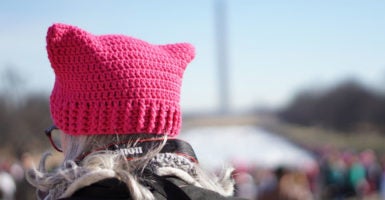 A protester wears a pink hat as thousands take part in the Women's March on Jan. 20, 2018, in Washington, D.C. (Photo: Russ R. Scott/CrowdSpark/Newscom)

The Daily Signal’s Kelsey Harkness attended both the Women’s March and the March for Life, and she joins us to discuss the differences between the two marches. We also cover Hollywood’s flirtation with a female James Bond, National School Choice Week, and CNN’s incredibly biased questioning of a Trump administration official.