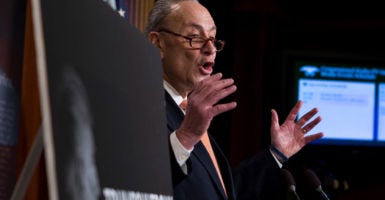 The federal government’s three-day closure ended with something of a whimper on Monday.

The Senate voted overwhelmingly to reopen the government with a stopgap bill that will fund the government through Feb. 8, according to The New York Times.

Now that the shutdown has ended (without the world coming to an end), it’s worth comparing this year’s shutdown to what happened last time in 2013.

According to one top-ranking senator, shutting the federal government down over the issue of immigration is a crazy idea.

“I believe in immigration reform,” he said. “What if I persuaded my caucus to say, ‘I’m going to shut the government down, I am going to not pay our bills unless I get my way’? It’s a politics of idiocy, of confrontation, of paralysis.”

Those aren’t the words of GOP Senate Majority Leader Mitch McConnell. No, that was Sen. Chuck Schumer, D-N.Y., in a CNN interview with Jake Tapper during the last government shutdown debate in 2013.

The “idiocy” of shutting down the government over something like immigration clearly didn’t stop Schumer from doing so over the Deferred Action for Childhood Arrivals amnesty program just four years later, despite Sen. Dianne Feinstein, D-Calif., saying that any such outcome could cause people to die.

And Schumer wasn’t the only Democrat to lambast the shutdown strategy in 2013, only to spearhead it in 2018.

In 2013, Democrats blitzed the media with a narrative that Republicans were holding the country hostage over their pet issues—at the time, funding for Obamacare.

“I call them ‘legislative arsonists’,” Rep. Nancy Pelosi, D-Calif., said at the time. “They’re there to burn down what we should be building up in terms of investments and education and scientific research, and all that it is that makes our country great and competitive.”

Sen. Bernie Sanders, I-Vt., an avowed socialist who caucuses with Democrats, said in 2013 that the shutdown was caused by Republicans who were angry about losing the 2012 presidential election.

Sanders said at the time, according to The Washington Free Beacon:

What they [Republicans] are saying to the American people tonight is ‘maybe we have lost the presidential election, maybe we’ve lost seats in the Senate and in the House. It doesn’t matter! We can now bring the government to a shutdown—throw some 800,000 hardworking Americans out on the street, and we are going to get our way no matter what.’

In a recent MSNBC interview, Sanders denied saying that Republicans shut down the government over electoral failures. He blamed this year’s shutdown over DACA on the Koch brothers—billionaire brothers who fund libertarian and conservative causes, yet support amnesty.

President Barack Obama joined the fray in 2013 as well, saying:

Right now, House Republicans continue to tie funding of the government to ideological demands like limiting a woman’s access to contraception or delaying the Affordable Care Act, all to save face after making some impossible promises to the extreme right wing of their party.

The rhetoric was flipped this time around, but so was the government’s response.

The last shutdown, in which Democrats controlled the White House and the Senate, came with absurd political theater. The Obama administration aggressively closed all of the country’s over 400 parks and other various services.

A ranger interviewed by The Washington Times said, “We’ve been told to make life as difficult for people as we can.”

That certainly appeared to be the case.

The Obama administration actually placed barricades around the World War II Memorial in the District of Columbia, prompting several elderly veterans to move the barriers in defiance.

Mount Rushmore was also closed down as the National Parks Service not only blocked access to parking in front of the monument, but reportedly restricted access to viewing lanes around the monument as well.

The situation reached peak absurdity when the government blocked off parking lots at Mount Vernon, the privately funded and operated historic home of George Washington.

But the site’s parking lots were jointly owned by the government, so even though they require no daily government involvement whatsoever, officials used the shutdown as an excuse to close them.

White House Budget Director Mick Mulvaney said on Sunday that this government shutdown wouldn’t be as melodramatic as last time.

“President Obama wanted that shutdown [in 2013], and he wanted to weaponize it,” Mulvaney said, according to Politico. “This president has worked really, really hard to prevent a shutdown.”

This time around, most parks and tourist attractions remained open to visitors.

That stark difference only makes the Obama administration’s actions in 2013 seem vindictive, or perhaps an attempt to convince Americans that they need government more than they really do.

If anything, this year’s shutdown just demonstrated how partisan rhetoric can shift on a dime as political realities evolve—and, despite some inconvenience, how a temporary government closure does not portend the end of America.