Why Pro-Lifers Have Cause for Hope 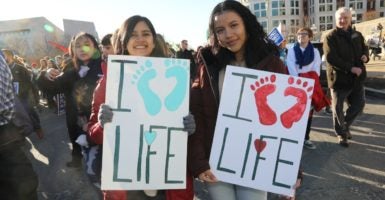 Two of the marchers at the 2018 March for Life. (Photo: Jeff Malet for The Heritage Foundation)

Forty-five years ago Monday, the Supreme Court issued its decisions in Roe v. Wade and Doe v. Bolton, inventing a constitutional right to abortion on demand.

Since then, over 59 million babies have been lost to abortion, and the U.S. remains one of only seven countries that allows abortions after 20 weeks, the age when studies suggest preborn infants can feel pain.

Yet there remains cause for hope. This past Friday, tens of thousands of Americans gathered in Washington, D.C., for the 45th annual March for Life in order to show their support for women facing unplanned pregnancies as well as the unborn.

This year’s theme, “Love Saves Lives,” served as a reminder that love has the ability to overcome all obstacles and grant women and children the opportunity to experience life to the full.

This year’s march was a historic one. While Presidents Ronald Reagan and George W. Bush addressed the March for Life via phone during their respective terms, President Donald Trump became the first president to address the March for Life rally via broadcast from the Rose Garden.

Congress was in session during the March for Life this year. As people gathered at the National Mall before the march, the House passed the Born-Alive Abortion Survivors Protection Act over on Capitol Hill. This bill ensures that children who survive failed abortions are treated as persons and given appropriate medical care.

The bill augments a 2002 law by providing for criminal consequences for health care providers that fail to care for an infant who is born alive. Treating a baby that is born alive after an abortion with the same medical care as any other newborn should not be controversial.

Speaker of the House Paul Ryan addressed the crowds shortly after the bill had passed, saying:

You know, I’ve been participating in the March for Life for years. One thing that has always struck me—and there’s one thing that strikes me again right now—is the vigor and the enthusiasm of the pro-life movement.

Looking out on this crowd, I can see there are people here of all ages, from all walks of life, but the young people here is what is so inspiring because it tells me this is a movement that is on the rise.

He is right. Millenials are increasingly pro-life. And a recent poll shows that 76 percent of Americans support substantial limits on abortion. Among the 51 percent of citizens that identify as pro-choice, 60 percent support restrictions on abortion.

Approximately 2,200 pregnancy resource centers nationwide continue to provide women not only with the physical resources necessary to choose life, but the emotional support and social networks that they need. Lawmakers at the state and federal level have passed commonsense laws to protect children. And the day before the march, the Department of Health and Human Services announced a new division charged with protecting the consciences of medical professionals who will not participate in abortions.

Although the pro-life movement is already changing the culture, the March for Life was a reminder that there remains much to be done.

In order for women to have access to as many resources as possible, pregnancy resource centers and faith-based adoption agencies must be free to operate according to their missions. And additional measures must be taken to protect the consciences of pro-life medical personnel.

The pro-life movement will continue to fight for life on all of these fronts.

On the anniversary of Roe and Doe, we remember the millions of children who have been denied their first and most fundamental right, the right to life. But we also reflect on the truth and beauty of the pro-life cause: that every human life, no matter how small or weak, has inherent dignity and worth.

Until our laws reflect this most essential truth, we will continue to gather and march, thousands strong, to proclaim the joy of the pro-life message. While we sorrow for what is lost, we hope for what is to come, and allow love to bring healing to all who have been affected by the pain of abortion.