I Went to the Women’s March. Here Are 11 Things I Saw. 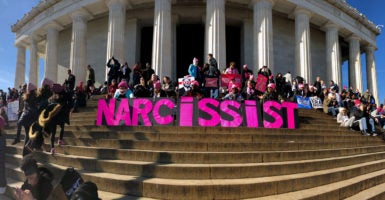 The second iteration of the Women's March was held on Saturday, Jan. 20, 2018, in front of the Lincoln Memorial. (Photo: The Daily Signal/Kelsey Harkness)

Editor’s note: This article contains adult content, due to the nature of signs and words used as part of the Women’s March.

Women wearing pink cat hats descended on the nation’s capital Saturday for a second time to march for women’s rights and protest a president they believe is disrespectful toward women.

“There’s a lot of inequality, especially when it comes to access to birth control, or health care, or abortion, or just women’s rights in general,” said one attendee from Minnesota who held a sign that read, “Saturdays are for the girls.”

As for President Donald Trump, she added, “He’s not my favorite.”

Compared to most attendees, this was toned down. Here are 11 things we saw and heard at the 2018 Women’s March in Washington.

The first Women’s March brought people to Washington, from near and far, but numbers this year were significantly smaller, not reaching the end of the Lincoln Memorial Reflecting Pool. Spirits, however, were equally as high. Last year, pro-life groups were told they weren’t welcome at the Women’s March. This year, invited or not, they showed up—signs in hand. Despite concerns about the pink cat hats being intolerant toward transgender women and women of color, they were on wide display again.

Those concerns arose last year during a panel I attended at the Women’s Convention in Detroit, hosted by the Women’s March. That panel, using the full vulgarity for the female body part, was titled “Not All P—-es Are Pink and Not All Women Have P—-es.” In speaking to attendees, many women objected to Trump’s more controversial comments, such as the NBC “Access Hollywood” “grab her by the p—y” recording from 2005, and the alleged recent “s—hole” remarks.

However, the signs used by some Women’s March attendees to protest Trump were in some cases just as vulgar. From witches to sharks, protesters found a way to relate their themes to Trump. During the 2013 government shutdown under the Obama administration, officials closed national parks, museums, and monuments, and in some cases, barricaded them off from the public.

Despite Congress’ failing to reach an agreement to keep the government open Friday night—which just happened to be the evening before the 2018 Women’s March—the Trump administration did all it could to minimize the impact of the shutdown, effectively allowing the march to go on as usual.

When I asked a U.S. Park Police officer why he was still working during a government shutdown, he responded: “Just because they didn’t do the right thing doesn’t mean we shouldn’t.” And some harmless trolling.

Beautiful weather all over our great country, a perfect day for all Women to March. Get out there now to celebrate the historic milestones and unprecedented economic success and wealth creation that has taken place over the last 12 months. Lowest female unemployment in 18 years! The costume is inspired by by Margaret Atwood’s “The Handmaid’s Tale,” a book (and Hulu television series) about women who are oppressed and kept in captivity for reproductive purposes and  impregnated against their will. Last year, Planned Parenthood used this theme to protest the GOP health care bill, and since then, it’s a regular at women’s protests.

Awalin Sopan, of Northern Virginia, said she was scared when watching “Handmaid’s Tale.”

“I felt like, oh, this could happen,” she told Bre Payton of The Federalist and me. Although there were some verbal clashes between pro-lifers and march participants, the Women’s March was a peaceful demonstration showcasing the power of the First Amendment.